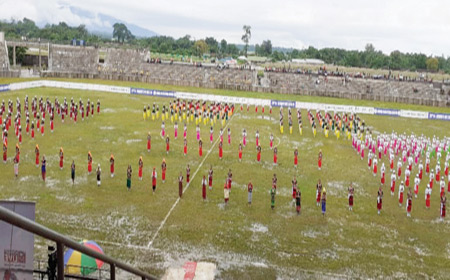 Staff Reporter
PASIGHAT, Sep 10: The 25th Senior National Women’s Football Championship got off to a colourful start here in East Siang district on Tuesday.
The brief opening ceremony that lasted about half an hour featured a mega dance by cultural troupes dancing to the tune of the patriotic song, ‘Hamara Arunachal’, to a packed stadium.
The Railways beat Mizoram 4-0 in the inaugural match played in the newly constructed stadium. All the goals were scored by Yumnam Kamala Devi.
Overnight rain rendered the ground slippery, which greatly affected the players’ ability to play their natural game.
The Railways were leading Mizoram 1-0 at halftime. All the four goals were scored by Devi [42nd, 64th, 84th, 88th mins].
Assam thumped Andhra Pradesh 9-0, Madhya Pradesh beat Haryana 2-1, and Bihar beat Karnataka 3-0.
Arunachal Pradesh will open their championship campaign with a match against Telengana on 12 September.