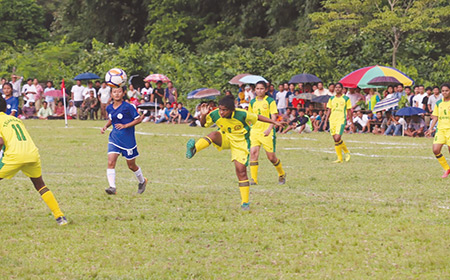 Correspondent
PASIGHAT, Sep 15: Arunachal Pradesh advanced to the quarterfinals of the 25th Senior Women’s National Football Championship in style, beating Telengana 2-0 in their return match at Kiyit in East Siang district on Sunday.
Techi Akung scored both the goals, in the 15th and the 26th minute.
Telengana created a few scoring opportunities but failed to convert due to poor finishing. Arunachal had beaten Telengana by the same margin in their first match on 12 September.
In another match, Pondicherry beat Kerala 2-1.
The match had been scheduled to be played on Saturday, but was postponed and shifted to the IGJHSS playground near the airfield here after rain caused substantial damage to the main playground.
Other match results:
Gujarat beat Uttarakhand 2-0; Manipur beat Tripura 6-0; West Bengal trounced Rajasthan 14-0; Jharkhand drew with Punjab (1-1).