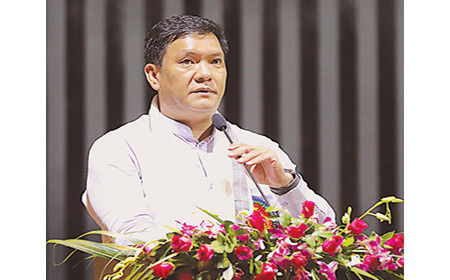 ITANAGAR, Sep 15: Chief Minister Pema Khandu on Sunday reiterated his government’s commitment to halting all “individual-centric” schemes and projects and taking up only those that are beneficial to the society as a whole.
Addressing the 52nd Engineers’ Day (26th in Arunachal) celebration organised by the Arunachal Pradesh Engineer Service Association (APESA) here on Sunday, Khandu urged the engineers of all works departments to not encourage schemes that are pushed by individuals but only forward those which are on demand by an entire community, village or society.
“The state government has already decentralized the planning process by giving the responsibility of forwarding schemes and projects to the district planning committees, based on specific needs at the grassroots level,” he said. “This will bring in transparency, curb corruption, and usher in development in the real sense.”
The CM said that, once they are started, all the projects will be geotagged in order to be monitored remotely. He admitted the existence of hurdles like unavailability of internet services at all the places, but expressed optimism that “once implemented, there won’t be any unfinished, half-finished, over-the-budget, and prolonged projects in the state.”
Lauding the contribution of engineers in building the state, Khandu urged them to deliver to the optimum.
“You have a government in place with the political will to back you up when required. You need not fear anybody. Be committed to your responsibilities and do not compromise with quality development of the state,” he said.
Commending this year’s theme of the celebration, ‘Engineering for change’, Khandu called for a change in planning and designing, and using technology specific to the geological conditions for creating infrastructure. He, however, opined that “the change should first take place from within.”
The CM advised the engineers to also learn from traditional methods of construction that have withstood time and nature. He gave the example of the iron chain link suspension bridge over the Tawangchu river in Chaksam, in Tawang district.
“This bridge was built in the 1450s by Lama Chaksam Wangpo, and it is fabled that 108 similar bridges were built by him in the entire region. The said bridge is still serving its purpose,” Khandu said.
He also said creating infrastructure should not be at the cost of the environment and the cultural identity of the state, and suggested incorporating traditional architectural designs in constructing public buildings and other structures.
Responding to a memorandum submitted by the APESA, Khandu assured that he would take up the issues with the chief secretary and do the needful.
The APESA’s demands include complete halt on functional posts; conducting DPC meetings on time; appointing eligible senior engineers as head (secretary) of all works departments; and “creation of post of an engineer-in-chief where more than one chief engineer exist at present.”
Chief Secretary Naresh Kumar described engineers as “the epicentre of life, as life wouldn’t be life as it is today without the creations of engineers.”
“Arunachal Pradesh is passing through a transition phase and the engineers are the wheels of transition,” he said, and assured his availability 24×7 for any issue or work.
While PWD CE (SIDP) Atop Lego made a presentation on the theme ‘Engineering for change’, calling for adoption of newer technologies, former CE Tomi Ete, who retired as the PHE&WS secretary in 2014, said “half the problems would be resolved even if the engineers implemented in letter and spirit the knowledge gained in their respective degree courses on the ground.”
RWD Minister Honchum Ngandam and PHE&WS Minister Wangki Lowang called for innovation and sincerity on the part of the engineers to develop the state in right earnest.
The celebration, headed by APESA president Pura Tupe and secretary-general K Perme, also included a symposium on the theme, which saw the participation of engineers of all works departments and students of various institutes, along with resource persons from the NERIST, the NIT and RGU. (CMO)