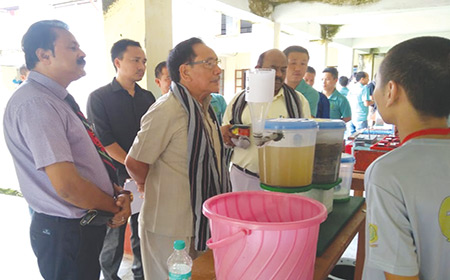 Staff Reporter
ITANAGAR, Sep 15: The two-day annual ‘Technovation V 3.0’ festival of the Rajiv Gandhi Government Polytechnic (RGGP) started here on Sunday.
Technovation is a yearly technical festival whose celebration started in 2017 with the aim of making learning fun for the students. Each year a different theme is selected, and this year’s theme of the technical festival is ‘Metacognition’, which is aimed at encouraging the students to know and understand their own thought processes.
Chief Information Commissioner Dr Joram Begi along with former principal of Pune (Maharashtra)-based College of Engineering, Prof Vasant Dattatraye Barve, attended the inaugural function of the event.
Chief coordinator of Technovation V 3.0 and lecturer Rollin Sorum presented a brief on the festival, and RGGP Principal Dr AK Tripathy in his address expressed joy over the participation of delegates from other polytechnic institutes of the state. Wishing all the participants well, he urged everyone to accept challenges in a positive spirit.
Prof Barve in his address said, “We should explore the world and contribute to science in whatever possible way which can be used for the welfare of human beings.”
He also said Indian scientists have earned respect across the world through their scientific research works. “We have become a launching pad for newer technologies,” he said.
Dr Begi extended Engineers’ Day greetings and best wishes to the Technovation V 3.0 festival. He said it’s appropriate for the polytechnics to celebrate Engineers’ Day “as the students are engineers in the making and the teachers are engineer-makers.”
“Innovations have changed our lives, making it much easier and faster, but it should be cost-effective, environment-friendly, sustainable and local-relevant. For inventing anything, one should be a keen observer who can identify and diagnose problems and translate thoughts into reality,” he said.
The inaugural function ended with a scientific demonstration by Prof Barve, and a visit to the exhibition stall by the dignitaries.
The main attractions of the first day were the exhibition, ‘slow bike race’, ‘culinary master’, ‘the presentino’, ‘kitkat’, treasure hunt, and a quiz programme.
Participants from all the polytechnics of the state are attending the event.