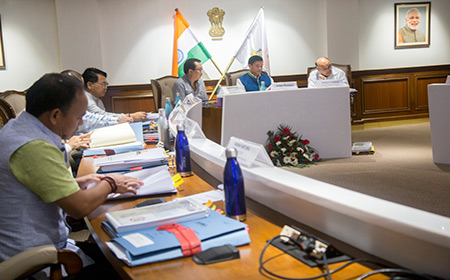 ITANAGAR, Sep 17: The state cabinet headed by Chief Minister Pema Khandu has decided to adopt the UPSC civil services examination pattern for selection of candidates for Group A and B posts in various departments through the Arunachal Pradesh Public Service Combined Competitive Examination.
The state government will also henceforth provide one-time financial assistance to Arunachal Pradesh Scheduled Tribe candidates who qualify national level exams conducted by the UPSC, it was decided during the cabinet meeting held on Tuesday.
The candidates will be given an assistance of Rs 2 lakhs on clearing the prelims, and Rs 3 lakhs on clearing the mains. This scheme will apply to the Indian Forest Service, the Combined Defence Services Examination, the National Defence Academy, central police organisations, central health services, the Indian Engineering Services, and the Indian Statistics Service, in addition to the civil services examination.
In another decision, the cabinet approved the implementation of the 7th CPC pay scales for teachers and librarians of government polytechnics, with effect from 1 January, 2016.
The council of ministers also approved establishing a new circle headquarters in Paramputu, with camp headquarters in Loth, in Lower Subansiri district.
In a major relief for in-service departmental candidates for direct recruitment to Group A and B posts, the cabinet has relaxed the age limit by five years, in addition to the normal relaxation of age, for departmental candidates with three years of continuous service.
In order to encourage and ensure sustainable development of sericulture activities, the cabinet also decided
to create a separate directorate of sericulture.
Furthermore, special remission has been granted to five prisoners who have completed more than 50 percent of their terms of prison, as part of the commemoration of the 150th birth anniversary of Mahatma Gandhi.
The cabinet also approved the Hamara Arunachal Abhiyan, a campaign that will collaborate with all stakeholders and take up issues like drug addiction among youths, communal harmony, traffic management, and such.
The mission will be aimed at educating the people and curbing the menaces that the state is assailed by.
Meanwhile, welcoming the approval to establish the new circle HQ in Lower Subansiri district, Education Minister Taba Tedir, who represents the Yachuli constituency, said this was a long-pending demand of the people of Upper Yachuli.
“I extend my gratitude to Chief Minister Pema Khandu and all of my cabinet colleagues for their support,” Tedir said. (With CMO input)