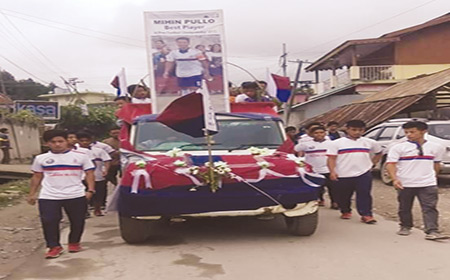 ITANAGAR, Sep 17: The Arunachal Pradesh Football Association (APFA) has deeply mourned the sad demise of renowned footballer Mihin Pulo.
Pulo, who had carved a niche for himself in the state’s football with his goal-scoring skills and offensive playmaking, died in Ziro in Lower Subansiri district on Monday.
In a condolence message, APFA general secretary Kipa Ajay termed Pulo’s death a great loss for football in Arunachal.
Pulo had represented Arunachal three times each in Santosh Trophy and
Dr T Ao Football Tournament and in Subroto Cup (U-17) in 2016-17. He had also won several titles, such as the best player and the highest scorer, in many state level tournaments, and also won the ‘golden boot’ in the 11th Tadar Tang Memorial Football Tournament.
The Naharlagun United Football Club also mourned Pulo’s demise and prayed for eternal peace of the departed soul.