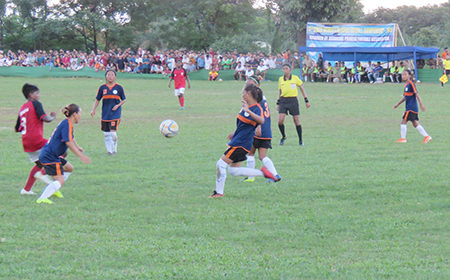 [ Prafulla Kaman ]
PASIGHAT, Sep 20: Arunachal’s semifinals dream in the 25th Senior Women’s National Football Championship (SWNFC) fell flat after the host team went down meekly to Odisha on Friday.
The host team failed to live up to the home crowd’s expectation and lost the match 0-5 to their superior opponent at the College of Horticulture & Forestry playground here.
Odisha were leading the host team 3-0 at halftime.
In another match, reigning champion Manipur pummeled Jharkhand 15-2 to join Tamil Nadu, the Railways and Odisha in the semifinals.
Manipur and Jharkhand reached the quarterfinals, beating Rajasthan (10-0) and Uttarakhand (4-0), respectively.
Tamil Nadu had beaten Madhya Pradesh 4-2 in the first quarterfinal, while the unstoppable Railways notched up another big (12-0) win against Himachal Pradesh on Thursday.
The semifinals will be played on 22 September.