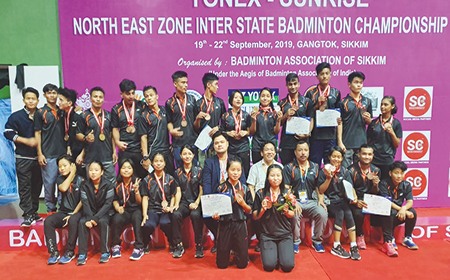 GANGTOK, Sep 22: The mixed doubles pair of Charu Jaji and Pinky Karki won the gold medal in the North East Zonal (NEZ) Badminton Championship, which concluded here in Sikkim on Sunday.
They defeated the pair of Hriat Puii Lal and Lal Biaksanga Ralte of Mizoram 21-17, 21-17 in the final.
Apart from the gold, Arunachal bagged two silver and five bronze medals in the championship.
Laa Tukum, who participated both in the senior men’s and junior boys’ categories, won the silver medals.
Tukum lost 18-21, 21-19, 22-24 to top seed Orijit Chaliha of Assam in the men’s category, and in the junior boys’ category, he lost the match to Manipur’s Bidyasagar 21-23, 13-21.
His elder brother, Laa Talar, crashed out of the men’s singles in the first round, losing 22-24, 21-19, 13-21 to Orijit Chaliha.
Chow Kiyon Manpang also crashed out of the first round of the junior boys’ singles. He was beaten by Kilangkumba Kichu of Nagaland 13-21, 21-14, 21-18.
In the senior women’s singles, Laa Yajum settled for the bronze after losing 19-21, 14-21 to top seed Suzen Buragohain of Assam in the semifinal.
Buragohain had also defeated Gunzan Gongo of Arunachal in the first of the women’s singles (21-10, 21-14).
The senior men’s doubles pair of Akshay Raito and Raja Gupta of Arunachal, who had won the gold in the first NE Olympic Games held in Manipur last year, lost in the semifinal against the pair of Manipur’s Unilkumar L and Kh Punsiba Singh 16-21, 09-21, and settled for the bronze.
Arunachal also bagged a bronze medal each in the junior boys’ doubles, the junior girls’ singles, and the junior mixed doubles events.
Biki Lakai and Sonam Tamang had to settle for the bronze in the junior boys’ doubles after they lost their semifinals match against Suraj Goala and Angshuman Gogoi of Assam 13-21, 18-21.
Dolma Tamang lost her semifinals match to Maheswari Ksh of Manipur 13-21, 16-21 and settled for the junior girls’ singles bronze.
The junior mixed doubles pair of Raj Thapa and Takio Puna lost 21-10, 21-19 to Manipur’s Vilinda Huidrom and Sirzeet in the semifinals and had to contend with the bronze.
Napi Tayam lost in the quarterfinals to second seed AR Barman of Tripura in the junior girls’ singles event.
Meanwhile, the Arunachal State Badminton Association (ASBA) has congratulated all the medal winners, particularly the gold medal winning pair of Jaji and Karki, for their superb performance.
ASBA secretary Bamang Tago was all praise for Jaji as he won the title in his maiden appearance in the tournament, without any proper coaching or training.
“Hailing from Kra Daadi district, Jaji started playing badminton barely three years ago. He was the cynosure of all eyes during the championship,” Tago said. He expressed hope that Jaji would bring more laurels to the state in the days to come.