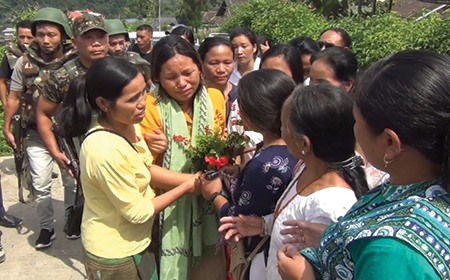 Staff Reporter
KHONSA, Sep 29: Chakat Aboh, the consensus candidate of all the political parties in the state, said she will file her nomination as an independent candidate on Monday, the last day for filing nominations for the bye-election to the Khonsa West assembly constituency in Tirap district.
Five political parties in the state on Saturday unanimously decided not to field any candidate against Aboh in the bye-poll, scheduled for 21 October.
Although the five political parties have decided to not field any candidate in the bye-election, four nomination papers have already been issued, according to a source.
“I will file nomination (as an independent candidate), as suggested by all the political parties of the state,” Aboh told a huge gathering of supporters and well-wishers here on Sunday.
Chakat Aboh’s husband, Tirong Aboh, who was the MLA elect, was killed along with 10 others in the Tirap massacre of 21 May, allegedly by NSCN (IM) militants.
Addressing the gathering, Aboh said she is deeply indebted to Chief Minister Pema Khandu, state BJP president Tapir Gao, APCC president Nabam Tuki, NPP state president Nima Sangey, NPP general secretary Mutchu Mithi, PPA chairman
Kamen Ringu and state JD (U) president Ruhi Tagung for their sympathy for her and her deceased husband, son and the nine others who were massacred by suspected NSCN (IM) militants.
She said Khandu stood by her since the massacre.
“The CM had assured me during the seventh assembly session to favour me, and finally, he kept his commitment,” said Aboh.
She appealed to her supporters and well-wishers to have courage and be united “to bring fruitful result in the days to come.”
She also acknowledged the people of the capital complex for their help and cooperation during her tough times.
Chief of Dadam village, Wangchu Lowang, welcomed the decision of the political parties to not field any candidate, terming the decision “matured” and “genuine.”
The chief appealed to the people of the constituency to exercise their democratic rights in a free and fair manner “and obey the command of the constitution if there are contestants.”
Earlier, the supporters and well-wishers, especially those from Kheti, Thinsa and Dadam, accorded a rousing welcome to Aboh on her return here from Itanagar.