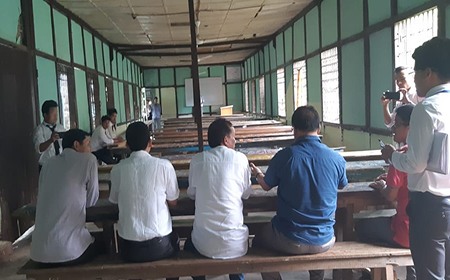 DAPORIJO, Sep 29: Upper Subansiri Deputy Commissioner Kanto Danggen on Sunday conducted an experiment at the government higher secondary school (GHSS) here, posing as a student to find out whether the last benchers could hear the teachers properly.
Sitting on the last bench, he asked a teacher to teach a lesson, but the DC was unable to hear the teacher. “Nothing could be heard,” the DC said to the teacher standing at the far end of the huge classroom.
The DC was on an inspection of the GHSS to understand the plight of the students due to infrastructure and teachers’ shortages, informed the school’s
alumni association chairman, Dosh Dasi.
The school was in the news recently because of the acute shortage of teachers and classrooms.
The school’s principal had earlier informed that there are four dilapidated classrooms in the school for 1781 students, with each classroom accommodating more than 400 students.
“Presently, there are only six PGTs and an equal number of TGTs in the school. There is no PGT for English, biology, physics and geography and TGT for English, Hindi and PCM,” informed the principal.
Later, the DC held a meeting with DDSE Tape Jeram, Principal (in-charge) Taluk Taji and the executive members of the school’s alumni association. He directed the DDSE to arrange the required teachers, to which the latter expressed helplessness, saying he could manage only a teacher for geography.
The DC also directed the DDSE to furnish a report on the availability of qualified teachers in the defunct schools in the district.
Danggen disapproved of granting funds against defunct schools, and advised the DDSE to not make any proposal for fund or posting of teachers for such schools in the future.
Earlier, Dasi apprised the DC of the problems faced by the school due to acute shortage of teachers, classrooms and other necessary infrastructure.
It was decided in the meeting that the DC would apprise the government of the issue of teachers’ shortage at the school and seek necessary action.
The alumni association said it would construct separate toilets for the students of both the sexes and press for construction of at least three classrooms under the CMSSY in the current financial year, since the construction of 14 RCC classrooms and an auditorium might take 3-4 years, the meeting resolved.
The DC also inspected the under-construction school building.