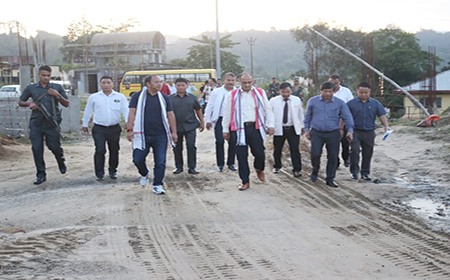 RAKAP, Sep 29: Youth Affairs & Sports Minister Mama Natung, along with Sports Authority of India (SAI) Director General Sandeep Pradhan and the SAI’s Regional Director Subbash Basumatary, visited the proposed permanent site for the special area games (SAG) centre here in Papum Pare district on Sunday.
Pradhan is on a visit to Arunachal to assess the feasibility of establishing a centre of excellence in boxing, weightlifting and martial arts in the state. Union MoS for Youth Affairs & Sports, Kiren Rijiju, had announced the establishment of the centre during his visit to Itanagar, along with the ministry’s secretary, in early July this year.
Seeking support from Pradhan, Natung said, “We want to bring our youths to the mainstream through sports. However, to realize this dream and take sports to new heights, I need your support and guidance.” He said having such a centre is significant for grooming sportspersons.
The minister also gave assurance that he would initiate policies oriented towards the welfare of the state’s sportspersons. However, he sought support from the SAI DG to turn the proposals into reality.
Responding to Natung’s request, Pradhan said, “I am confident, and I hope we will be able to start the centre of excellence. Whatever we decide will be executed nicely.”
Sports Director Tadar Appa submitted a 10-point memorandum to the SAI DG, seeking, among other things, starting the centre of excellence temporarily at the Sangay Lhaden Sports Academy, until the full-fledged infrastructure comes up.
Appa also advocated promoting indigenous and tribal games.