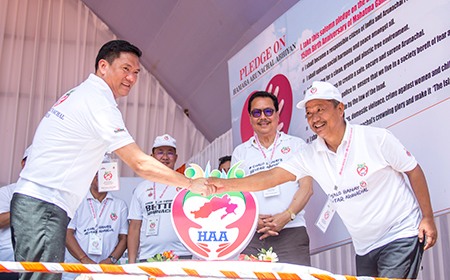 Staff Reporter
ITANAGAR, Oct 2: The ‘Hamara Arunachal Abhiyan (HAA)’ was launched on the occasion of the 150th birth anniversary of Mahatma Gandhi at the Indira Gandhi Park here on Wednesday.
On the occasion, Chief Minister Pema Khandu, Deputy Chief Minister Chowna Mein and Home Minister Bamang Felix jointly called on citizens of the state to be equal partners in the development process.
The trio highlighted that it was not the responsibility of the government alone to bring positive changes or development in the society, and suggested that citizens start performing their fundamental duties before pressing for their fundamental rights.
The state leaders said that it was important to place the state first before the community or tribe for development in the true sense.
To make Arunachal a better place, Chief Minister Pema Khandu also administered a pledge on HAA to a massive gathering of people representing different NGOs, student community, government bodies, CBOs and various civil society organisations from across the state.
The pledge taken on the occasion of 150th birth anniversary of Gandhi Jayanti resolved on becoming a responsible citizen, to work for social harmony and to protect the environment. It also aimed to restore Arunachal its crowning glory and to make the state as ‘island of peace’.
People gathered resolved to work as citizen police to maintain law and order and pledged to refrain from any illegal act.
Earlier in his speech, the chief minister said the HAA has come into being to give thrust to the ‘Team Arunachal’ campaign. He said ‘Arunachal is a challenging state in terms of cultural diversity. So to bring the feeling of oneness among Arunachalees, not only the government but also people must take proactive part in it.’
He said to bring together all tribal communities, government exercises such as budget preparation involves consultation with all community bodies. This is to give out the message that Team Arunachal is a government represented by every section of people.
The CM further said any breakdown in law and order discourages investment, which is vital for economic development of the state. To maintain law and order in the state, people need to be made equal participant, he asserted.
The chief minister said the HAA will continue till 2024 without using a single penny from the government exchequer. He said funding for the campaign will be sourced from the corporate sector.
Chief Minister suggested that HAA campaign should reach out to people on issues such as language preservation and promotion, drug awareness, prevention of money culture in election etc.
On the occasion, ‘Picture Gandhi’, a bestselling book on Mahatma Gandhi, published by Tulika Publishers for children was released. The book has been translated to five tribal languages of Arunachal, namely Adi, Apatani, Mishmi, Nyishi, Nocte and also Bodo language of Assam.
The book is originally written in English by award winning author Sandhya Rao.
The chief minister also felicitated the six translators from six different tribes of Arunachal and Assam.
Performances from various school, college and university students also gave a gist of the HAA, besides cultural troupes from different districts presenting the cultural diversity of the state. The Arunachal Pradesh Police, which will play an integral part in the HAA, also had a band and drill display.
To mark Gandhi Jayanti, the Itanagar Municipal Council in collaboration with the district administration of the Capital Complex organised a Shramdaan at the park, where the chief minister along with his Council of Ministers, MLAs, chief secretary, DGP, senior officers and officials from the district administration and the IMC actively participated in the mass social service to get rid of plastic waste. (With CMO inputs)

The Student Solar Ambassador workshop, a global seed concept of the Gandhi Global Solar Yatra-2019 to mark the 150th birth anniversary of Gandhi was also inaugurated by the chief minister as part of the HAA.
Held by the Arunachal Pradesh State Council for Science & Technology, Department of Science & Technology, over 3000 students from 22 different schools participated at the Arunachal Pradesh Science Centre here and more than 1500 participated at different Vivekanda Kendra Vidayalayas to make the event pan-Arunachal.
The solar mission aims to sensitize young minds about energy sustainability and environmental care, besides promotion of solar energy and skill development.
Later, Khandu administered a pledge to students from various schools to play the role of student solar ambassadors. He also administered a pledge on swachhta hi sewa.