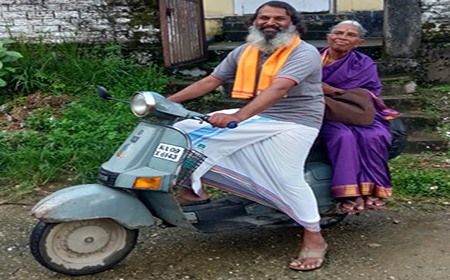 [ Nellie N Manpoong ]
ITANAGAR, Oct 2: The mother-son duo of Chudarathna and D Krishna Kumar arrived here in the state capital on Tuesday after travelling across the country in their 20-year-old scooter — a classic Bajaj Chetak.
Beginning their ‘matru seva sankalp yatra’ from Mysore in Karnataka on 16 January, 2018, the duo has travelled to over 20 states and covered a distance of 47, 370 km in the past one year and eight months.
The duo has also travelled to neighbouring countries of Nepal, Bhutan and Myanmar on their trusty scooter.
In Arunachal Pradesh, the duo has travelled to Parshuram Kund in Lohit district, Bomdila in West Kameng district and Tawang district.
Kumar, who left his corporate job of 13 years in Bangalore, shares how his mother had given most of her life to the well being of the joint family they lived in.
“After my father’s demise some four years back, I brought my mother to live with me in Bangalore. During a casual conversation one day, I learnt that she had not been to even the closest pilgrimage site in our state. At that very moment I resolved to take her across the country on a pilgrimage tour,” said a now 40-year-old Kumar.
“The scooter was a gift from my father 20 years back. With it, I feel that my father is accompanying us in our travels,” he added.
Seventy-year-old Chudarathna also shared her experience of travelling the country with her son.
“I am fortunate to have a son like him. He has shown me the smallest village to the largest city and the holy sites they house,” she said.
On whether she had any health issues or trouble riding on a scooter for months on end, Chudarathna says, “I am completely comfortable in my seat with the blanket on it. He takes care of all my health issues. I neither have any bodily pain nor do I have any illness. I didn’t know I had such strength at my age.”
While they appreciated the people they met on the way for making their travels easier, Kumar said that they were strictly against taking any money or gifts.
“We are using the interest amount from the money I had saved during my corporate days. The only thing we seek is shelter and home-cooked meals, which we usually receive during our stays in ashrams or other religious retreats and charity organisations,” said Kumar.
Chudarathna and Kumar are now set to travel to Ziro in Lower Subansiri district, Aalo in West Siang, Khonsa in Tirap district and other places along the way.
They also expect to meet Prime Minister Narendra Modi in New Delhi before heading homeward in the next six months.
Before riding off for some sight-seeing in the capital with his mother, Kumar said, “Give quality time to your parents and speak to them for at least 30 minutes or an hour. Appreciate your parents while they are still around.”