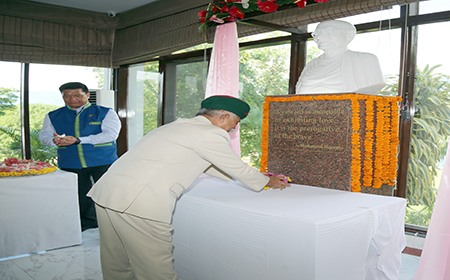 ITANAGAR, Oct 2: Cleanliness drives, campaigns against single-use plastic and tree plantations marked the 150th birth anniversary of Mahatma Gandhi in Arunachal Pradesh on Wednesday.
Governor B D Mishra along with Chief Minister Pema Khandu unveiled a life-size statue of Gandhi at Niti Vihar here, and paid tribute to the Father of the Nation.
Speaking on the occasion, Mishra called upon the people to follow the path shown by Gandhi.
“Gandhi’s values of unity, discipline and transparency are the guiding principles for good governance. All these values are encompassed in his principle of ‘Satya and Ahimsa’, he said.