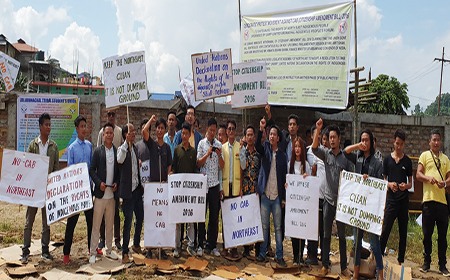 Staff Reporter
ITANAGAR, Oct 3: Protests were held across the North East region on Thursday against the BJP-led central government’s proposal to implement the Citizenship (Amendment) Bill (CAB) under the banner of the North East Forum for Indigenous People (NEFIP).
In Arunachal Pradesh, the United Arunachal Indigenous Peoples Forum (UAIPF) staged a protest here at the Indira Gandhi Park, wherein protestors asserted that “the CAB is against the interest of indigenous people of the region.”
Speaking to reporters, UAIPF president Laffe Paffa said, “We will not allow for a Tripura-like situation to foster in our state. Union Minister Home Amit Shah should know the negative impact of the decision, which may change the demography of our state and the entire North East region.”
“We will never support this Bill and the indigenous people of Arunachal and the North East region should come forward and fight against the decision to pass this Bill. We oppose any move of the central government to bring back the Bill in the Parliament for discussion and further approval,” Paffa exhorted.
He also appealed to all like minded people and leaders from all community-based organisations, student organizations and all those who wanted “safety and security and protection of indigenous people of the region” to support the democratic movement against the CAB.

Thousands of people representing different Naga tribes attired in their traditional dress on Thursday took out a protest rally in Kohima, Nagaland against the proposed CAB.
The protest march was held under the aegis of Joint Committee on Protection of Indigenous People (JCPI), Nagaland and the NEFIP.
They also submitted a memorandum to Nagaland Chief Minister Neiphiu Rio stating that the “CAB was like a Damocles sword hanging over the head of all the indigenous tribes of the northeast region.”
NEFIP vice president Theja Therieh and joint secretary Tia Longchar requested the chief minister and the state government to take up with the Central leadership to respect the sentiment of the people in the region in general and the state of Nagaland in particular and not to pass the bill in the interest of peace and harmony in the region.
Earlier, addressing the gathering Theja Therieh claimed that once CAB is passed in the parliament and becomes a law, illegal immigrants will get full right to settle in Nagaland and will take over the indigenous inhabitants.
He said the Naga people want the state government and the elected representatives of the state Assembly and Parliament, to join hands in protecting the indigenous people.
“We should voice together and tell the Centre to listen to our voice,” Therieh said.
He urged the Centre not to impose the CAB or one language policy upon the region.
Representative from various tribes, including Ao, Chakhesang and six Eastern Nagaland tribes, Gaon Burah Federation also conveyed solidarity towards the issue saying that “we will continue to fight tooth and nail till Nagaland is exempted from the purview of CAB”.
On 9 September this year, Union Home Minister Amit Shah had said that the CAB will be brought again during the fourth conclave of the North East Democratic Alliance.
Even with strong oppositions and protests held against the bill in several parts of the Northeast, the bill was passed by the 16th Lok Sabha on 8 January,2019. However, it could not be tabled in the Rajya Sabha following resistance from multiple parties and lapsed after the Lok Sabha term ended.
The Bill proposes according Indian citizenship to Hindus, Jains, Christians, Sikhs, Buddhists and Parsis from Bangladesh, Afghanistan and Pakistan after seven years of residence in India instead of 12 years, which is the norm currently, even if they do not possess any document. (With PTI inputs)