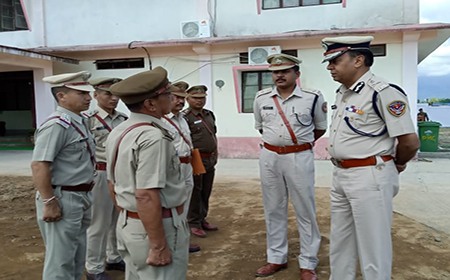 PASIGHAT, Oct 8: Director General of Police (DGP) RP Upadhyaya visited the commandant’s office of the 5th IRBn headquarters and inspected the newly completed headquarters of the battalion at 2 Mile area here in East Siang district last Saturday.
The DGP inspected the commandant’s office, the quarters, the 100-bedded bachelors’ barrack, the school building, the drill shed, and water and electricity supply, besides other essential amenities in the premises.
Upadhyaya was accompanied by DC Kinny Singh, SP and Commandant (in-charge) Rajiv Ranjan Singh, RWD EE Kipa Rinya, and RWD AE Kamin Rukbo.
The DGP suggested incorporating a children’s park in the premises, and lauded the RWD for the timely completion of the project. He directed the SP to submit an estimate for extension of the garage and procurement of additional gym items for the gymnasium hall.
Later, interacting with the IRBn officers and jawans, the DGP exhorted them to uphold the dignity and prestige of their uniform by being a disciplined and professional force.
“We must rise up to the expectations that the people and the state government have reposed in us. We are duty-bound to maintain law and order under the purview of the rules and regulations,” he said.
On the state government’s according top priority to modernizing the police department, he said “various proposals, ranging from infrastructural augmentation, construction of new PHQ, and TCL action plan have been approved, including the recent approval by the cabinet committee, amounting to Rs 80 crore.”
He also called for having in place “proper coordination and communication” in the matter of taking up grievances and feedback from the officers and jawans.
The DGP also held a meeting with the officers and jawans of the district police, and dedicated a recreational room at the Reserve Police Line here to the police personnel. He also visited the under-construction women’s police station, and the police station here. (DIPRO)