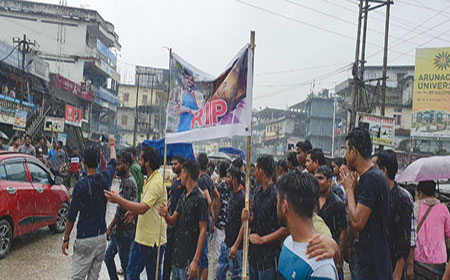 Staff Reporter
NAHARLAGUN, Oct 9: One person reportedly died after being assaulted in an apparent incident of road rage after a pickup truck (Tata Mobile) hit an SUV (Scorpio), here on Tuesday evening.
The deceased has been identified as 30-year-old Dinesh Sahani.
According to police reports, the incident occurred at around 6.30 pm when the SUV, driven by one Gida Punio (33), with passenger Phassang Sakter on board, on their way to Si-Donyi Ground behind the Helipad area, was hit by the pickup truck.
The pickup truck, which had 12 persons on board was returning after taking part in the idol immersion procession. The driver identified as one Devol Choudhary, after hitting the SUV attempted to speed away but instead hit a scooter and came to a stop after hitting a wall, police reports state.
“An enraged Gida Punio then chased after and assaulted, first driver Choudhary and then Dinesh. All others on board had by then fled the scene after the vehicle was stuck against the wall,” the police informed.
“As per the accounts of eye witnesses and driver, only one person, namely Gida Punio first assaulted the driver Dewol Choudhary and then Dinesh Sahani. Later, Gida Punio took away the vehicle’s key from the driver and told him to inform his vehicle’s owner to repair the Scorpio. He also gave his phone number. Later in the night, when Dinesh complained of some health issues, he was admitted to the Tomo Riba Institute of Health and Medical Sciences (TRIHMS) by his wife Kiran Sahani and relatives. However, he was declared brought dead on arrival by the doctors at TRIHMS,” the police added.
Based on the information, the police detained the assaulter and his friend the same night and later on receipt of an FIR lodged by the relatives, the duo (SUV driver and passenger) was arrested under section 302 of the IPC.
The prime accused is currently behind bars.
The dead body was taken to Rama Krishna Mission Hospital in Itanagar for preservation and post mortem has been conducted. An investigation is currently on.
Meanwhile, an agitated group of people had reportedly gathered around the police station the same night demanding action against the persons involved in the incident. The angry group of people were pacified only after assurance of swift action by the police.
In a statement on Tuesday, the Capital Complex SP has said that police investigation is currently on and appealed all “not to make it a communal issue.”
“The unfortunate incident took place when one vehicle hit another vehicle. The incident should have been reported to the police instead of the persons involved taking the law into his own hands and assaulting another person, which led to the tragic death,” the SP added.
On Wednesday morning, a large group of people took out a protest rally here demanding strict action against the culprits involved.
They claimed that Dinesh was thrashed in the incident site “till he was unconscious and then rushed to the hospital by nearby people.”
The protesters also shut down shops since 10 am. All the shops, except pharmacies and a handful others, remained closed till late evening following the protests.
They demanded that the culprits be booked under relevant sections of the law and to make the FIR and post mortem report public.
“Such incidents should be condemned by all irrespective of their community or region. Incidents of such kind should not be repeated anywhere,” said a protestor.
The Capital SP also informed that the police have taken all preventive measures to avert any kind of tension in the town.

Later in the day, members of the Arunachal Chamber of Commerce and Industries, led by its president Tarh Nachung met Kiran Singh Sahni, wife of the deceased here in Naharlagun and offered financial assistance.
Consoling her on the unfortunate death of her husband, Nachung assured of the organisation’s support and that it would take up the case with the state government to provide ex-gratia to the victim’s family.
“We will ensure justice for the departed soul,” Nachung said and urged on the market community to maintain peace.
He also cautioned people against issuing provocative messages on social media, adding that the police are keeping a vigil on such activities.
Calling for peace in the town, Naharlagun Bazaar Welfare Committee general secretary Kipa Nai also advised the business community to inform the bazaar committee if they feel that “their pleas are going unheard by the authorities concerned instead of forcing a shutdown on the market.”
The body of the deceased was taken to Laluk in Assam on the same afternoon.

The All Arunachal Pradesh Student’s Union (AAPSU) has vehemently condemned the ‘forceful’ closure of shops, disruption of vehicular movement and illegal protest rally in Naharlagun on Wednesday by some members of the non-APST community.
While condemning the reported death of Dinesh Sahani after being assaulted at the helipad area of Naharlagun on Tuesday, the AAPSU has also taken strong exception to such “illegal rally in the market areas of Naharlagun and forceful closure of shops by participants of the rally even after the culprits have reportedly been arrested by the police.”
The AAPSU also questioned the police and the district administration for being “silent” while “such illegal activities were being organized in broad-daylight by the protestors.”
“We view the matter very seriously and warn individuals, groups etc from outside the state not to try and unnecessarily provoke the sentiments and aspirations of indigenous people of the state,” the AAPSU said in a press statement.
Stating that the union would not remain silent to such provocations, the union appealed to all individuals, especially from outside the state to respect the law of the land and the sentiments of the indigenous people.
The union demanded the authorities to launch immediate investigation and trace out the persons behind the illegal rally and forceful closure of shops at Naharlagun on Wednesday.