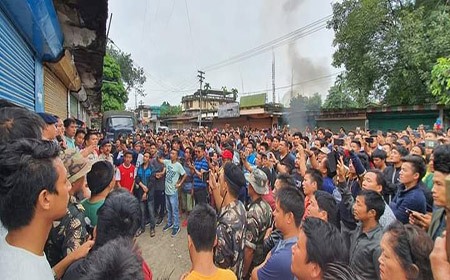 Staff Reporters
NAHARLAGUN/ITANAGAR, Oct 10: Hundreds of people, including members of the United Arunachal Indigenous People’s Forum (UAIPF), took out a peaceful rally here on Thursday morning in protest against the protest and market shutdown that had been carried out by a group of non-APST people here on Wednesday, following the death of one Dinesh Sahani in an incident of road rage a day earlier. 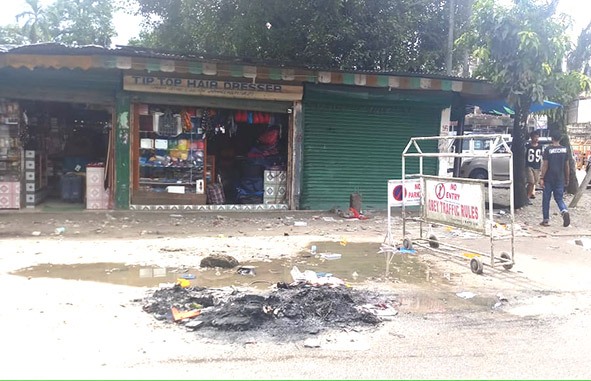 The participants in Thursday’s counter-rally condemned the undemocratic protest and forcible shutdown of the shops on Wednesday, and demanded the arrest of one Montosh Saha, who in a video (which has since gone viral on various social networking sites) delivered an inflammatory speech during the Wednesday protest.
Capital Complex SP Tumme Amo informed this daily that the counter-protest was peaceful and no untoward incident occurred during the entire rally.
However, a group of unidentified persons had earlier in the morning broken the lock on Saha’s shop here, and reportedly broke some items in the shop and burned other items on the road in front of the shop. Timely arrival of police and IRBn personnel prevented the group from causing more damage to the shop.
“The damage to the shop was minimal; only the lock was forcefully opened and plastic items worth a couple of thousand rupees, approximately, were damaged,” the SP said.
The situation was, however, under control all the time, he added.
The SP said the police will register a suo moto case over the damaging of the shop, since no FIR has been lodged by the affected party.
“The situation is now back to normal, and the authorities are continuously monitoring the situation,” Amo said.

Meanwhile, reacting to the hate speeches and the forcible shutdown of shops in Naharlagun by the non-APST protestors on 9 October, the All Arunachal Pradesh Students’ Union (AAPSU) on Thursday condemned the action, terming it an “undemocratic means of protest.”
The union also condemned the road rage incident which led to the death of Sahani, and appealed to the citizens to maintain peace and tranquility in the capital.
Addressing press persons at the Arunachal Press Club here, AAPSU president Hawa Bagang said, “We condemn the inflammatory speech given by one Montosh Saha. He should be arrested immediately, and his trading licence should be cancelled.”
The AAPSU demanded that the ringleaders who tried to give a communal colour to the incident by resorting to hate speeches and undemocratic protest should be arrested immediately.
“The ringleaders of the flash mob have hurt the sentiment of the indigenous people. Our state is peace-loving and harmonious, and we will not allow them (instigators) to create mistrust between non-APST and indigenous brothers,” said Bagang.
He also urged non-APST people not to listen to instigators who try to foment communal tension.
The AAPSU further urged landlords and owners of rent houses to furnish detailed information about their tenants to the district administration and the home department to check criminal activities.
The All Nyishi Students’ Union (ANSU) has also condemned the hate speeches and the undemocratic protest by the group of non-APST people over the death of Sahani.
Addressing a press conference at the press club, ANSU vice president Tana Sushil Tara said, “If any Arunachalee faces repercussion outside the state, the ringleaders and hate speakers should be held responsible.
“How can they compare a road rage incident with the late Nido Tania incident? Those hate speakers should be booked under appropriate sections of the law,” Tara demanded.
The ANSU has lodged an FIR against the ringleaders who had instigated the protest on Wednesday, and has served a three-day ultimatum to the authority to arrest the ringleaders of the protest, saying not arresting them would invite a series of agitations.
Demanding a stringent inner line permit (ILP) policy to check influx, the ANSU said the government should “pay attention to non-APST individuals who resort to anti-government and anti-Arunachal activities.”
“In the ILP there is a clause that a person cannot resort to any anti-government activity,” Tara said.
Stating that “idol immersion procession is the root cause of drunken driving and water pollution,” the ANSU demanded that the authority designate a place for celebration of festivals of the non-indigenous people and ban idol immersion in the rivers.
The UAIPF has also lodged an FIR at the Naharlagun police station against Montosh Saha for instigating the undemocratic protest rally and delivering hate speech.
Saying that Saha had tried to create communal disharmony by threatening to impose economic blockade against Itanagar, the forum sought his immediate arrest.