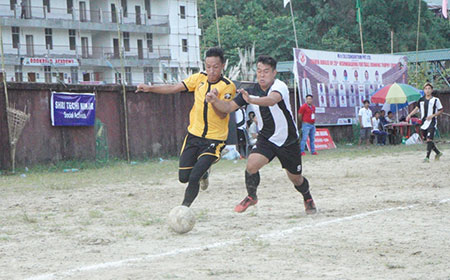 CHIMPU, Oct 12: Four teams – the Chimpu FC, Aniya Rayo FC, 5/1 United FC and YG FC (Papunallah) advanced to the next round of the 25th Vishwakarma Running Trophy Football Tournament.
Both Chimpu FC and Aniya Rayo FC advanced to the round of 16 after they played out a 1-1 draw here on Saturday.
In another match, the 5/1 United FC defeated YG FC (Papunallah) 4-2. Despite losing the match, the YG FC made it to the next round along with the 5/1 United FC.
In the first match of the day, the T Group FC were given walk-over against Ward No.1 FC. But the team failed to it to the round of 16.
The second match played between Chimpu United and Bozochem FC ended in a 1-1 draw.