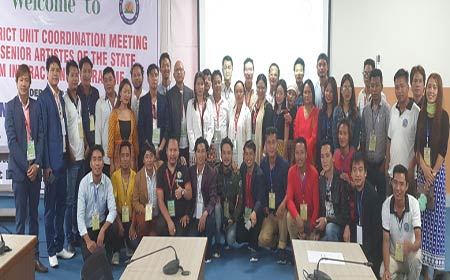 ITANAGAR, Oct 13: The first state unit coordination meeting cum interaction programme of the Arunachal Artistes Forum (AAF) was held here at the Dorjee Khandu Convention Centre on Sunday with participation of senior and legendary artistes, besides several district units of the AAF.
Addressing the gathering, AAF chairman Takam Dado Tallo urged the artist community to remain united and work for the welfare of artistes and the state. He emphasized on strengthening the hand of AAF.
Senior artistes Taba Yall Nabam, James Bisnu Nabam, Bengia Tabb, Neelam Pope, Gichik Taza, Ha Nayum, Biki Para Tok, Toko Yallam Gem, and actor Tai Tugung, among others also took part in the discussion, and adopted resolutions for the welfare of state artistes.
The resolution included recommending for inclusion of the chairman or general secretary of the AAF in the selection board or committee for the selection of state awardees.
The members also called for conducting annual artistes award ceremony; honorarium for veteran artistes; state award to artistes who play vital role in the field of national integrity; establishment of school of drama in the state; establishment of movies screens in every district; two percent seat reservation for Arunachal artistes in government jobs; allocation of corpus fund for the organization for all its activities; proposal for establishment of artistes village in the state, etc.
The AAF decided to pursue the resolutions with the state government for their adoption.