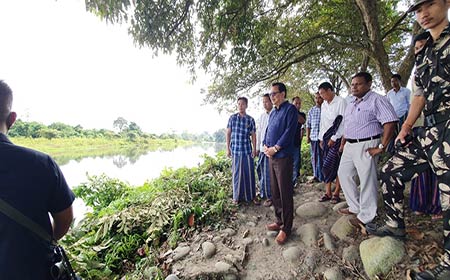 CHONGKHAM, Oct 19: Deputy Chief Minister Chowna Mein on Saturday visited the flood-affected areas of Chongkham-4, Gunanagar, Kherem and Alubari, and the Kamlang river downstream of Lohit bridge in Namsai district.
The DCM gave assurance that flood protection works in the areas would be taken up in phases. He also said that a rope suspension bridge would be constructed over the Teang river to connect Chongkham-4 with Chongkham-2 and other villages across the river.
Mein also inspected the community health centre and the government higher secondary school (GHSS) here, where he said that a new “2 plus G hospital building” would be constructed, and that the old hospital buildings would be renovated.
The DCM also assured that he would provide money from his local area development fund for setting up a solar water pumping system, and for employing a sweeper and a contingency driver for the hospital, besides construction of a multipurpose hall and other infrastructure at the GHSS.
During his visit to the farmers’ training centre (FTC) in Kherem, the DCM expressed dismay on finding that a large number of rubber saplings that had been developed in the FTC over the last two years were left without having been distributed to needy farmers across the state on time.
He, however, assured to provide fund for a constructing a water lifting system at the FTC for irrigation, and asked Agriculture Deputy Director (Training), Vikash Biswas, to develop a demonstration plot-cum-nursery for dwarf varieties of arecanut in the FTC.
Later, Mein attended the Sarkar Aapke Dwar camp, where he visited the stalls put up by various departments, and urged the people to take advantage of the programme.
The DCM also attended the Maha Kathina Civara Dana at Chakma Basti in Chongkham, and addressed the gathering there.
Earlier, Mein participated in a ‘Gandhi sankalp yatra’ organized by BJP workers of the area to promote the ideals and principles of Mahatma Gandhi with regard to cleanliness.
Among others, Namsai DC Bijay Talukdar, SP Ankit Kr Singh, and public leaders accompanied the DCM during his visit. (DCMO)