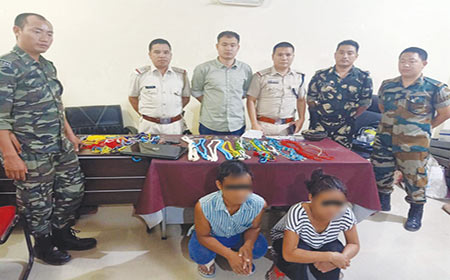 NAHARLAGUN, Oct 20: The police here have arrested a husband-wife duo who was on a burglary spree in the capital on the pretext of looking for rented apartments.
The accused have been identified as Joram Tang and Nikh Yajur, from Yazali in Lower Subansiri district, currently residing in Papu Nallah.
Capital SP Tumme Amo informed that the police had been receiving several complaints of daylight thefts from various parts of Naharlagun for the last few weeks.
“In one such case, the miscreants had stolen a large quantity of traditional beads from D Sector area,” he said.
Under the SP’s supervision, a team comprising, among others, Naharlagun SDPO Rike Kamsi, Naharlagun PS OC, Inspector K Yangfo, and Investigation Officer (IO), SI G Tape, visited all the places of occurrence, and analyzed the CCTV footages taken from wherever they were available.
“It was found that in all the cases, the modus operandi was that they would look for open doors and check if the occupants were present or not. If the occupants were absent, they executed their plan. If occupants were found in the rooms, the duo would pretend to be looking for rental rooms,” the SP informed.
Reportedly, the couple would take away whatever they found unattended, such as clothes, traditional ornaments, laptops, etc.
On 18 October, on receiving specific input, the IO and his team rushed to the identified location and nabbed the couple.
The duo confessed during interrogation, and led the police to a large quantity of stolen items.
The SP informed that the couple confessed to being drug users, and that “they committed such thefts to buy drugs.”
While further investigation is on to recover other stolen items, the SP has urged the residents of the capital complex to install CCTV cameras in their residential premises, and to remain vigilant against thefts.