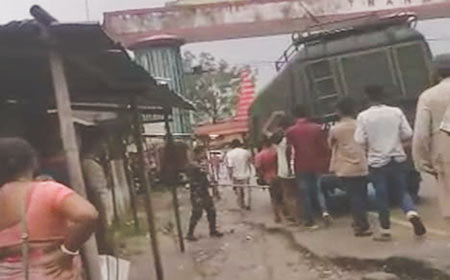 Staff Reporter
ITANAGAR, Oct 23: The state police have been accused of physically assaulting some of the Inner Line Permit(ILP) violators with lathi while they were being dropped off at Banderdewa Check Gate during the recent ILP checking drive carried by the All Nyishi Students’ Union along with the district administration on Monday last.
The ILP violators were reportedly made to stand in a queue as they prepared to move to the other side of the check gate while, the police personnel struck some of them with a lathi.
When contacted, Capital Complex Superintendent of Police Tumme Amo, informed this daily that he had given strict directions to the personnel on duty during the particular day, to never use any force on violators.
“The police personnel should not have hit anyone. My directions have always been to never use lathi or any force on ILP violators”, the SP claimed adding that the police have however, not received any complaint till date.
Around 400 violators were detained during the drive which was carried out at 13 locations in Itanagar and Naharlagun.
This incident has put the state police in a bad light once again as they have already been accused by the ANSU of being careless in allowing people to enter the state merely on paying cash without obtaining ILP.