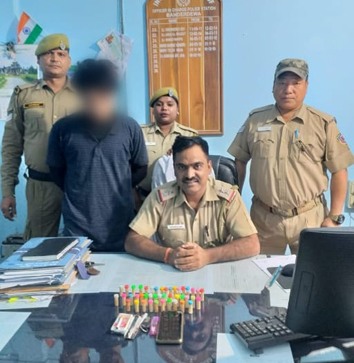 Banderdewa, Oct 24: The capital unit police arrested a drug peddler from Banderdewa area on Thursday with about 52.25 grams of “suspected heroin,” informed Capital SP Tumme Amo.
This is the sixth successful arrest this year, the SP informed.
Before the arrest, the police received information from sources that a drug peddler is carrying narcotic drugs in a motorcycle, to be supplied at Naharlagun area.
Under the supervision of the Capital SP, Naharlagun SDPO R Kamsi, and a team led by Banderdewa police station OC SI RK Jha, the drug peddler from Aalo in West Siang district was intercepted at the Banderdewa gate.
He has been detained along with the motorcycle. Forty vials (52.25) grams of suspected heroin, two insulin syringes and a mobile handset have been recovered from his possession, the SP added.
A case has also been registered at the Banderdewa police station under section 21(b)/ 27 NDPS Act and investigation is being done to trace the source of the drugs.