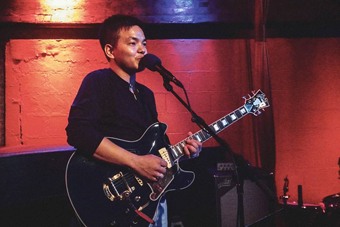 ITANAGAR, Oct 24: As the sound of Nyishi tunes reverberated in the halls of New York, Takar Nabam, earlier this month, became the first artist from the state to ever perform in the United States.
Nabam did two solo performances at Sofar Sounds in Brooklyn and at Rockwood Music Hall in Manhattan, where he enthralled the listeners with his songs, written in Nyishi and in English.
“No one had ever heard about Arunachal Pradesh. I told them it borders China, Myanmar, Bhutan. They were quite surprised to hear about such a place and the lengthy journey I took. Honestly, I was quite nervous to perform there, but the American audience was very receptive, it didn’t take me long to adjust and do what I do”, said Nabam.
Takar’s debut Nyishi single, ‘Nyokum Sokhi To’ was well received by the American audiences. He plans to release another Nyishi single and a few other English songs in the months to come.