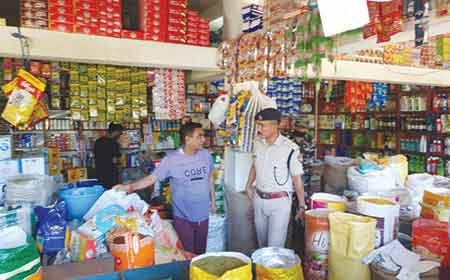 ITANAGAR, Nov 2: The capital complex administration carried out a raid in Gandhi Market here on Saturday and seized 150 kilograms of single-use plastic from several shopkeepers.
The raid was carried out by EAC Dakli Gara, CO Likha Radh and Itanagar SDPO Kamdam Sikom, supported by the CRPF and personnel from the Itanagar police station.
Twenty-two shops were shut down for a few hours during the raid, in order to conduct legal formalities. The shopkeepers were later let off with a warning, the officials claimed.
The officials informed reporters that “today’s raid was basically to create awareness among shopkeepers and consumers, so that they avoid single-use plastic and adopt other ways and methods.”
The officials said more such raids will be conducted in other parts of the capital complex, and appealed to the public to support the business community and the administration in making the state free from single-use plastic.