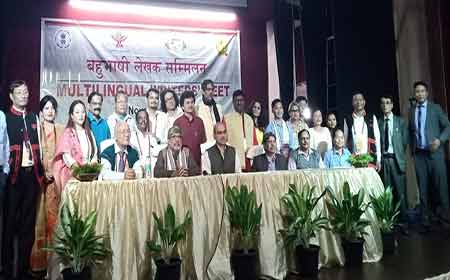 PASIGHAT, Nov 3: The two-day multilingual writers’ meet here in East Siang district provided a platform for eminent writers from across the country to showcase regional and mainstream literature to the young generation and the people as a whole.
Addressing the concluding ceremony of the meet on Sunday, Sahitya Akademi Secretary K Sreenivasarao said, “The warm response from the people of Pasighat has encouraged us to organize such events in Pasighat and other parts of Arunachal Pradesh in future too.”
The second day of the literary events, especially
the short-story telling session and the poets’ meet, drew huge applause from the audience.
Writers Jahnavi Gogoi (Assam), Arjun Deo Charan (Rajasthan) Mohonto Panging (Arunachal), Nabakumar Nongmeikapam (Manipur) and S Venugopal (Tamil Nadu) read out their short stories during the short-story telling session, which was chaired by Odia writer Gourahari.
In the poets’ meet, which was chaired by Arjun Deo Charan, Bodong Yirang and Ponung Ering Angu recited their self-composed poems in Adi. Other noted poets who captivated the audience with their self-composed poems included Inumoni Das (Assamese), Sutapa Sengupta (Bengali), Taro Sindik (Hindi) and BR Lakshmana Rao (Kannada).
The self-composed poems were also narrated in Hindi and English for the benefit of the audience.
Books’ exhibition by the Sahitya Akademi was another attraction of the event.
Later, the writers visited Siluk village, the birthplace of the literary luminary of Arunachal, Lummer Dai, and paid homage to the statue of the literary doyen.
The event was hosted by the Sahitya Akademi, in collaboration with the Arunachal Pradesh Literary Society and the Imphal (Manipur)-based Central Agricultural University, at the College of Horticulture & Forestry campus here. (DIPRO)