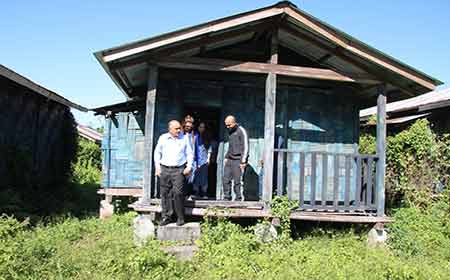 ROING, Nov 3: Chief Secretary Naresh Kumar on Sunday visited the sites of ongoing infrastructure projects, besides ecotourism projects and agriculture and horticulture farms, here in Lower Dibang Valley district.
He visited the Diphu Nallah area to inspect possible tourism sites, and inspected the Orange Festival site in Dambuk to assess the scope and pace of work. He suggested improvements and additions to be made in order to “enhance the experience of the tourists while using the facilities being undertaken at the site.”
The chief secretary showed keen interest in enhancing the tourism and horticulture potential of Dambuk after visiting the Kone Gipong eco-tourist lodge
being constructed in Dambuk amid orange orchards and with a view of the Sisiri river; the orange orchards in Kapang village, and the proposed site for the integrated demonstration farm for agriculture, horticulture and forestry at Bagan, in Dambuk.
He proposed “enhancing the area under orange cultivation in the district,” and asked the horticulture department to work out a mechanism through which the farmers can be aided to start cultivating oranges, and in turn help in reverse migration of the local inhabitants from the towns back to the villages of the area.
He also took stock of the horticulture department’s organic cultivation practices, and suggested measures to improve it.
Kumar met and heard the grievances of the GBs of Diphu Nallah area and the inhabitants of Kapang village, and assured to address their problems, wherever possible.
Earlier, inspecting the site of the district’s mini-secretariat, the tourism complex funded under the district innovation and challenge fund, and the UD housing complex, Kumar made modifications to the buildings’ design for better and efficient use of space, and instructed the executing agencies to expedite the pace of work.
The CS was accompanied by Deputy Commissioner Mitali Namchoom, SP SK Sain, Secretary Anirudh S Singh, Tourism Director Abu Tayeng, HoDs and administrative officers. (DIPRO)