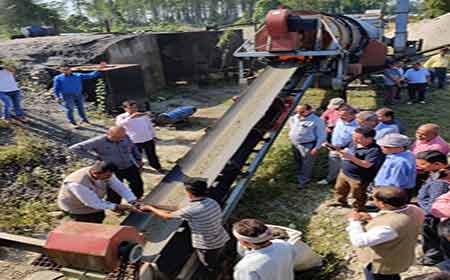 Staff Reporter
BORDUMSA, Nov 6: A plastic shredding unit has been installed here on Wednesday and about 80 meters of road was laid down in Bordumsa Township in Changlang district as part of a live demonstration and testing by using eight percent of the shredded plastic mixed with bitumen on Wednesday.
Established under the initiative of Bordumsa ADC Devansh Yadav, the unit costs around Rs 4 lakh for procurement and installation, and the fund was managed by converging with the Panchayat fund.The one acre of land for installation of the unit was donated by the villagers of Kumung village here.
The unit has a capacity of processing 150 to 200 kilograms of plastic material per day.
Elaborating on the processing of single-use plastic, the ADC said, “single-use plastic bottles are first shredded into a powder and mixed with bitumen. About eight percent of shredded plastic is then added to bitumen for road-laying works. Roads constructed from the said mixture prevents water from seeping inside, ensuring better durability for a long time.”
“Not only will this help in waste management but also ensure that the locals get a source of income. We have asked the local youths to sell plastic waste at a rate of Rs 25 per kg to the contractors executing the road work,” he said.
In addition, the unit will be managed by the local panchayat by involving the area’s youths and the shredded plastic waste will be then supplied to the contractors for road construction.
The ADC further informed that the National Highways and Infrastructure Development Corporation (NHIDCL)which has presently taken up projects in the area, has placed order for 25 tonnes of shredded plastic from the said unit for road construction in the area.
He further said that four tonnes of plastic waste converged from three districts in eastern Arunachal, namely Changlang, Namsai and Lohit, have reached the unit, while the same from Longding, Tirap and Lower Dibang valley districts is expected to arrive soon.
“The administration of all six districts of eastern Arunachal has converged to ensure steady supply of plastic waste to ensure success of the project,” said the ADC. (With inputs from DIPRO)