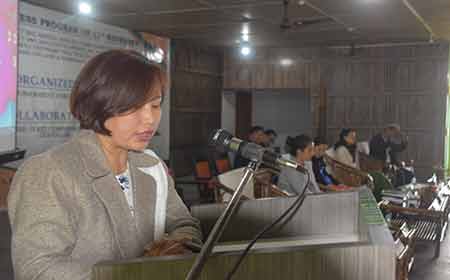 ROING, Nov 11: Arunachal Pradesh State Commission for Women (APSCW) Chairperson Radhilu Chai Techi advised people to “stop gender discrimination and gender conditioning of your children at home,” in her address during a legal awareness programme conducted here in Lower Dibang Valley (LDV) district on Monday.
“We tend to treat girls different from boys, and assign them different roles. While girls are taught household work and responsibilities of the family, the boys
are left free and learn to feel entitled, which needs to stop as this discrimination at home leads to discrimination in the family and in the society,” Techi said.
Stating that people have the wrong perception of the APSCW’s awareness activities as being only for women, she called for participation from all sections of the society “as when men help their female counterparts to be empowered, the society goes forward.”
“A society cannot progress without women getting equal rights and status,” she added.
Techi also spoke on the evils of polygamy, early marriage, domestic violence, and customary practices that are detrimental to women, and stressed on the need to register marriages to help keep a check on early marriage and polygamy.
She informed about the APSCW’s recommendation for 33 percent reservation for women in government jobs and the legislative assembly, and compulsory registration of marriage in Arunachal.
LDV DC Mitali Namchoom informed about the functions and mandate of the APSCW, and stressed on the importance of education in bringing about a change in the status of women in the society.
APSCW member Likha Joya spoke on compulsory registration of marriage, free legal aid, and the Maternity Benefit Act, 1961. SP SK Sain, Karmo Chotton, Nabam Yeni, DPO Marto Dirchi, advocate Bahe Mickrow and SI Pansa gave talks as resource persons during the programme.
Roing-based Enjalumenda Women’s Empowerment Forum (EWEF) president Lomi Linggi submitted a memorandum seeking a shelter home, a de-addiction and rehabilitation centre, and a vocational training institute for distressed and destitute women in the district.
She also highlighted “the need to conduct a consultative meeting with all CBOs and women NGOs regarding women’s right to property.”
The legal awareness programme was organised by the EWEF in collaboration with the APSCW. (DIPRO)