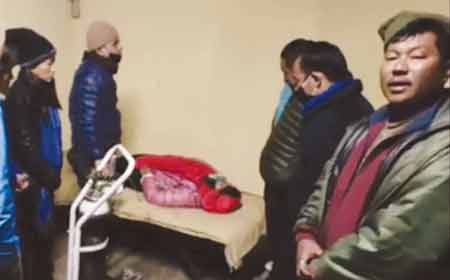 TAWANG, Nov 11: Personnel of the Sashastra Seema Bal (SSB) posted here became saviours to a group of 30 pilgrims from Bhutan who had suffered from acute mountain sickness (AMS).
The devotees were on a pilgrimage to the holy Bangajang Gompa on 9 November.
AMS is a negative health effect of high altitude, caused by rapid exposure to low amounts of oxygen at high elevation.
The symptoms include headaches, vomiting, tiredness, trouble sleeping, and dizziness.
As night approached, five of the devotees complained of AMS, and were brought to the SSB border outpost (BOP) in Bangajang, located approximately 1 km from the monastery. There is no village or government establishment in the 20 km radius of the area, except for two SSB posts at Bangajung and Negortang.
The condition of the patients was deteriorating fast, and the possibility of developing more serious conditions, like high altitude cerebral oedema or high altitude pulmonary oedema seemed imminent, both of which usually result in quick death due to low oxygen in the body and collection of water in the brain or lungs.
Sensing the gravity of the situation, ASI BN Kachari, who was commanding the post, admitted the patients to the BOP medical inspection room, and followed the standard procedures for treatment of AMS, with assistance from the post’s medic.
At around 10 pm, more pilgrims started suffering from AMS, and they, too, were provided with medical care. The patients were discharged the next morning.
The SSB personnel took great care of the patients, among whom three were medical officers. The members of the group expressed gratitude for the timely lifesaving act of the 38 SSB, informed SSB Commandant Rajesh Thakur. (Mon Tawang Vigilance)