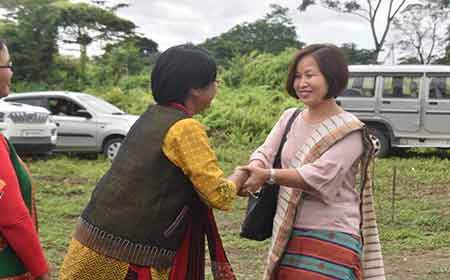 BOLUNG, Nov 12: Arunachal Pradesh State Commission for Women (APSCW) Chairperson Radhilu Chai Techi said it is important for gaon burahs and gaon buris to know the rules and regulations in order to deal with problems related to women.
She said this during a legal awareness programme organised by the APSCW, in collaboration with the district unit of the Adi Baane Kebang Women Wing (ABKWW), at Bolung village, in Lower Dibang Valley (LDV) district, on Tuesday.
“As gaon burahs and gaon buris play an important role in dealing with problems
at the grassroots level, they should know their powers and jurisdictional limits in dealing with cases brought before them, and be fair in their decisions,” Techi said.
Speaking about domestic violence/abuse and its different forms – physical abuse, mental abuse, verbal abuse, emotional abuse and sexual abuse – she said “it could happen to any woman, irrespective of social class, and is not necessarily committed by men only.
“In many cases, it is women who are guilty of perpetrating domestic violence on other women, and it should be our duty as women to be sensitive towards the problems of other women,” she said.
Techi also commented on reports and complaints received from women of the Adi tribe “that polygamy as a practice was uncommon within the community previously, but now it has become a common practice.”
She called upon the ABK to ponder it and come up with measures to stop the practice.
Techi also urged CBOs and NGOs to ponder important issues like women’s right over immovable property, 33 percent job reservation for women, increase in the reservation for women from 33 percent to 50 percent in the panchayats, and 33 percent reservation for women in the legislative assembly.
Stating that “the Adi society is a very progressive one and proactive culturally and socially,” LDV DC Mitali Namchoom advocated participation of men of the tribe in any discussion on women’s role and empowerment in society.
ABKWW (apex) president Olen Megu Damin encouraged all to “take away the knowledge of women’s rights and help in the empowerment of women in the society.”
APSCW member Likha Joya spoke on the powers and functions of the commission, while advocate Karmu Chotton spoke on sexual harassment of women at workplace and registration of marriage, and Dr Nabam Yeni spoke on mental health and suicide prevention.
DPO Marto Dirchi spoke on skill development and the government’s schemes for women, while advocate Atet Pertin spoke on customary practices, with special emphasis on land and marriage laws.
ABKWW (apex) general secretary Opak Takuk Ering also gave her inputs.
Shantipur OC, Inspector Sushant Saurabh Jha, spoke on crimes against women, and the POCSO Act. He advised parents not to overlook the complaints of children, and advised them to create a safe space for children.
LDV ABKWW president Oseng Apum Yirang submitted a memorandum outlining the requirement of an ‘indoor stadium-cum-multipurpose hall for women’, a separate custodial cell for women, a juvenile home, ‘framing of laws for extramarital and illegal relations’, and the need for setting up a de-addiction centre in the area. (DIPRO)