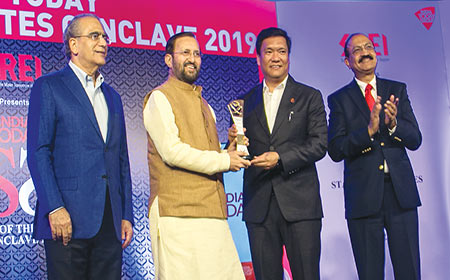 NEW DELHI, Nov 22: Speaking at the India Today conclave, Arunachal Chief Minister Pema Khandu on Friday said that, being a hilly state, Arunachal has its own unique challenges and opportunities, and that his government is giving “the highest priority” to connectivity for the state to develop.
Good quality road connectivity is reaching the interior villages, Khandu said, adding that “under the Trans-Arunachal Highway, which stretches over 1800 kms, 80 percent of road connectivity works have been completed.”
“Under Prime Minister Narendra Modi, rail and air connectivity to interior pockets in Arunachal are become a reality,” he said. “State capital Itanagar is already connected with railways, and
survey works are going on for rail connectivity in all foothills areas, and even in high-altitude areas like Tawang.”
Khandu also said his government is fully focusing on improving revenue generation. He informed that the state has increased its revenue from Rs 900 crore in 2015-16 to Rs 2100 crore in 2018-19.
“The objective is to increasingly become independent of the Centre’s funding for the development of the state,” he said.
“Every state should be able to stand on its own feet, without depending too much on the Centre; only then can we realize the goal of a new India,” he added.
Earlier, Arunachal was conferred the ‘most improved small state’ award in terms of infrastructure, law and order, and education by India Today.
The CM received the award from union Environment, Forest & Climate Change Minister, Prakash Javadekar.
Among others, Health Minister Alo Libang, Lok Sabha member Tapir Gao, and MLA Tsering Tashi accompanied the CM. (CMO)