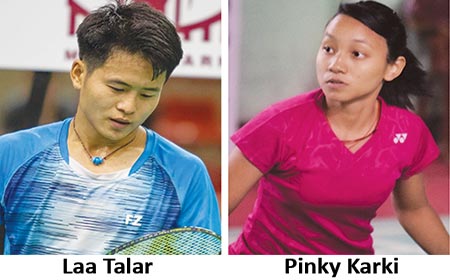 Karki to represent country at SMIBC

Staff Reporter
ITANAGAR, Nov 24: Arunachal’s Laa Talar won the bronze medal in the Victor Slovenia Future Series, 2019, a calendar event of the Badminton World Federation (BWF), held in Brizice, Slovenia, from 21-24 November.
Talar settled for the bronze after giving a tough competition to Jan Louda from the Czech Republic. He lost the match 21-18, 16-21, 24-22.
Earlier, Talar entered into the semifinals after defeating Yonathan Levit of Israel in
the first round (21-11, 21-12), Vegard Rikheim of Norway in the pre-quarterfinal (21-13, 21-13), and Joonas Korhonen of Finland in the quarterfinal (21-18, 16-21).
Talar had qualified for the main draw after defeating Karl Kart of Estonia 21-19, 21-19, Marcus Boman of Sweden 21-13, 21-8, and Khai Quan Yap of Malaysia 21-16, 21-9 in the first, second and third rounds of the qualifying matches.
Meanwhile, another badminton player from Arunachal, Pinky Karki, has been selected to represent the country at the Syed Modi International Badminton Championship (SMIBC)-2019, which a category of the HSBC BWF World Tour Super 300.
The championship will be held in Lucknow, Uttar Pradesh, from 26 November to 1 December.
Karki will participate in the women’s doubles event.
Arunachal State Badminton Association (ASBA) president Ratu Techi and ASBA secretary Bamang Tago on Sunday congratulated Talar on his achievement.
“It is great achievement for Talar to win medal at an event conducted by the BWF. His medal-winning performance in such a prestigious event would inspire the upcoming badminton players of the state,” both Techi and Tago said.
They also expressed happiness over Karki’s selection in the national team, and expressed hope that she would perform upto the selectors’ expectations and win glory for the country and the state.