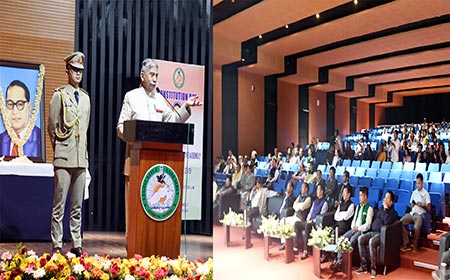 ITANAGAR, Nov 26: The lawmakers of Arunachal celebrated the state’s maiden Constitution Day, commemorating the 70th anniversary of the adoption of the constitution of India, at the legislative assembly here on Tuesday.
Constitution Day was first observed in the country in 2015, after Prime Minister Narendra Modi, while laying the foundation stone of the BR Ambedkar memorial in Mumbai (Maha-rashtra) in October 2015, appealed for observing the day to commemorate the birth anniversary of Ambedkar.
Attending the celebration in the state capital, former secretary-general of the Lok Sabha, GC Malhotra, noted that “only a handful of people from political science and law backgrounds are well-versed with the constitution.”
He suggested that the government organize seminars, debates and lectures, so that every individual of the country has better knowledge about the constitution and its framed laws.
“The constitution of India is flexible and not rigid. The reason new laws are framed is for the greater interest of the people and the country,” Malhotra said, and added that “the abrogation of Article 370 from Jammu & Kashmir is the best example of the constitution being flexible.”
He also spoke extensively on the history of the framing of, and the amendments to, the Indian constitution.
Highlighting the people’s fundamental duties, Governor BD Mishra said “if the people of India want to stay strong, sovereign and developed, they must abide by the constitution and respect its ideals and institutions.”
He advised the people to “develop scientific temper, humanism and the spirit of inquiry and reform, as enshrined in the constitution.”
Mishra advocated the concept of ‘one nation, one constitution’, and commended the abrogation of Articles 370 and 35 (A), which he termed “draconian.”
He expressed hope that the event would “create awareness, values and importance of the constitution.”
Deputy Chief Minister Chowna Mein lauded Ambedkar and the members of the constituent assembly for keeping provisions in the constitution to protect the diverse cultures of the Indian union, including the Northeast.
Legislative Assembly Speaker PD Sona also offered his gratitude to the framers of the Indian constitution and the chairman of the drafting committee, Ambedkar.
“As we celebrate this very important day, let us reiterate our commitment to the constitution of India, which shows the way forward to achieve our dreams and aspirations, and make our country developed in the true sense of the term,” he said.
Deputy Speaker Tesam Pongte appealed to all to “strive hard to make the country a better place to live in, and make sure that no one is deprived of justice, equality and liberty as enshrined in the constitution of India.”
The governor gave away prizes to the winners of the debate competition on the topic ‘Abrogation of Article 370 of Indian constitution’, which had been organized by the legislative assembly office on 25 November.
Mige Kambu from Rajiv Gandhi University (RGU) won the first prize, while Kanchan Dui, also from RGU, won the second prize, and Khyoda Yaluk of Arunachal Law Academy won the third prize.
The NSS unit of the Nirjuli VKV also celebrated Constitution Day. As many as 950 students took the Constitution Day pledge, and volunteers conducted a rally which saw the participation of 400 students.
Constitution Day was also celebrated in Dibang Valley HQ Anini, where government officials and members of the public were administered the Constitution Day pledge by the DC.
Addressing the gathering, EAC Toni Mitkong spoke about the importance of the constitution and paid tributes to the founding fathers and framers of the world’s longest constitution.
RGU also joined the nation in celebrating Constitution Day at the varsity’s Rono Hills campus in Papum Pare district. The programme was attended by Registrar Prof Tomo Riba, besides deans, HoDs, students, and others.
Addressing the gathering, Dr David Gao said the university would henceforth celebrate Constitution Day every year.
RGU Vice-Chancellor, Prof Saket Kushwaha, in a message appealed to the university community to uphold the principles of the constitution in letter and spirit.
“May the ideals enshrined in the constitution guide our lives on the path shown by BR Ambedkar and the visionaries who made India the world’s largest democracy,” the VC said.
Pro-Vice-Chancellor, Prof Amitava Mitra, in his address spoke about “the importance and uniqueness of the Indian constitution.” He requested all to respect the constitution, and informed that the Indian constitution is the largest written constitution of the world.
An essay writing competition on the topic ‘Constitution of India: Understanding the objectives and goals’ was also held by the university’s political science department.
The day was also celebrated in East Siang district with various activities, such as reading of the preamble to the constitution at government offices, educational institutions, anganwadi centres and other places, and recalling Ambedkar’s pivotal role as chairman of the constitution’s drafting committee.
At the DC’s office in Pasighat, ADC Tatdo Borang spoke on the history and importance of the constitution.
In Tirap HQ Khonsa, DC PN Thungon administered the pledge to the HoDs and other government employees.
In Longding, the day was observed at the GHSS, in collaboration with the education department. DC Cheshta Yadav, DLSA Secretary Epi Kapu, SP BR Reddy, advocates Wangtan Wangsu and Mongol Taki, the DDSE, principals, and students from various secondary and higher secondary schools attended the programme. (With inputs from DIPROs)