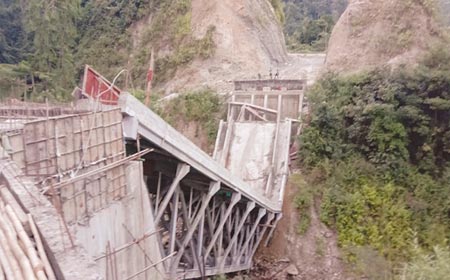 Staff Reporter
ITANAGAR, Nov 27: Under construction steel superstructure bridge at National Highway, commonly known as Orang-Kalaktang-Shergoan-Rupa Tenga Road (OKSRT) road has reportedly collapsed near Balemu on Tuesday.
ADC Kalaktang informed this daily that four labourers were injured during the accident and they have been evacuated to nearby hospital. The OKSRT road is being executed by Border Road Task Force (BRTF).
On being contacted, BRTF official Colonel Katkal informed that the bridge is executing by the Competent Infrastructure, a Guwahati based civil firm under sub-contract terms. Colonel Katkal further added that BRTF is ascertaining the cause of the collapse.
“We are investigating the reason of the collapse and summoned the civil firms’ proprietor to the site to investigate it, accordingly the flaws will be rectified” he added.
He further informed that the civil firm has reasoned that low intensity earthquake that occurred on 21 November could be the reason for collapsing of the bridge.