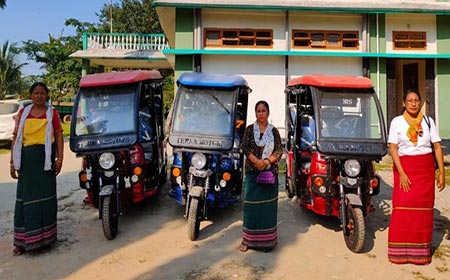 Staff Reporter
BORDUMSA, Nov 29: Eight e-rickshaws launched by the Bordumsa administration in Changlang district were handed over to women here on lease recently as part of an initiative which aims to provide better transportation facility to ASHAs, anganwadi workers, and the local people.
The first two e-rickshaws had reportedly been laun-ched six months back, while another six were procured last week. These have been procured with money from the DC’s untied development fund.
“Initially, the Bordumsa administration launched the first two e-rickshaws to address the transportation woes of ASHAs, anganwadi workers and the local people. A few women drivers came forward, requesting the authorities to let them operate the e-rickshaws. They said they specifically wanted the authorities to ensure that it is leased to their names and not their husbands’. The rickshaws will be operated either by the women drivers or their relatives,” Bordumsa ADC Devansh Yadav said.
He informed that the e-rickshaws have been kept at the CDPO’s disposal and will be leased to women drivers or their relatives for a period of one year.
“The first year, the sub-divisional board formed under the CDPO will provide e-rickshaws to six beneficiaries. They have to pay a charge of Rs 1000 per month for repair and maintenance of the rickshaw. After each year, the board will assess the performance of the women drivers and decide whether to let them continue the next year or not,” Yadav said.
He said the authorities have set only two criteria for availing these e-rickshaws: that only women drivers or their relatives are linked with the driving, and that they give first priority to anganwadi workers and workers of health sub-centres.