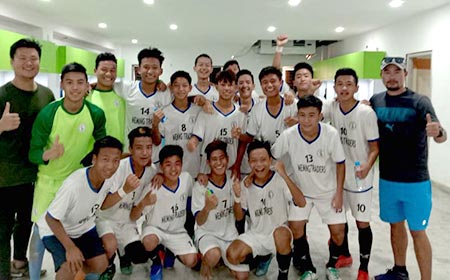 Staff Reporter
KALYANI, Dec 1: Arunachal stormed into the final of the Hero Sub-Junior Boys National Football Championship, defeating Kerala 2-0 in the second semifinal at the Kalyani Sports Complex in West Bengal on Sunday.
Arunachal will meet Meghalaya in the title clash on 3 December. This is the second consecutive final berth for Arunachal in the championship.
Arunachal scored twice in the first half and maintained the lead until the final hooter.
The boys started the match on attacking note, and pushed their rivals back to their own half, creating several scoring opportunities from the very beginning.
The mounting pressure on Kerala’s defence meant that Arunachal boys managed to find the breakthrough within the first half.
Jacky Rampung drew the first blood halfway through the first half, assisted by Damli Bomnyo. Mam Prema Sherpa made it 2-0 few minutes later.
The second half saw a tussle between the two sides. Kerala earned some good scoring opportunities; but Arunachal goalkeeper made impressive saves to deny Kerala any chance of finding the equalizers.
“It was an all round performance by our lads. We are looking forward to do our best in the final,” said team coach TD Wangja.
Meanwhile, Arunachal Pradesh Football Association (APFA) secretary Kipa Ajay expressed immense happiness over Arunachal reaching the final of the championship for the second consecutive year.
Congratulating the team for the win, Ajay expressed hope that the boys will continue their unbeaten run in the championship and bring laurels to the state by winning the championship trophy.