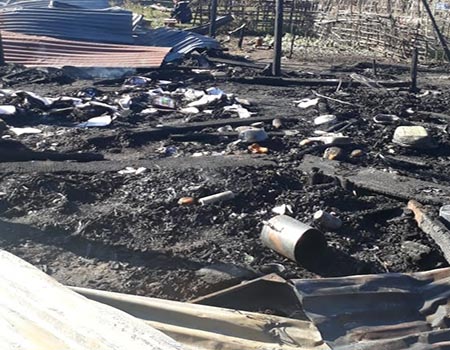 PASIGHAT, Dec 5: Several families were rendered homeless after a massive fire reduced at least seven kutcha houses to ashes in Tebo village near GTC area, Pasighat on Wednesday.
Three fire tenders were pressed into service to douse the fire, which fire broke out at 1.30 am.
There were no reports of loss of life and the cause of the fire is yet to be ascertained.
Local MLA Kaling Moyong visited the affected families and announced immediate relief for them.
He also directed the authorities concerned to assess the properties lost or damaged and submit the report.
Moyong advised the people to take utmost care while handling inflammable items like cooking gas, gas stove and candle light to avoid such house fires.
East Siang DC Dr. Kinny Singh has also urged the people take fire safety seriously by taking proper precautions, especially during the dry season.
Meanwhile, SDO Oli Perme and DDMO G Tsumo visited the spot and took stock of the situation. DIPRO