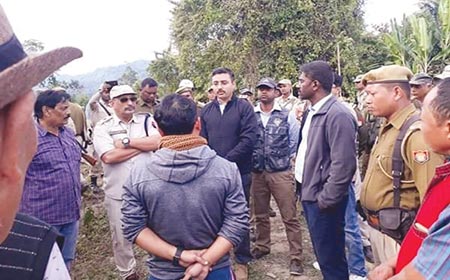 Staff Reporter
ITANAGAR, Dec 8: Officials of the police and the forest departments of Assam reportedly entered inside Arunachal’s territory in Tarasso, in Papum Pare district, on Saturday and stopped the construction of the PMGSY road from Ramghat to Radaso village.
According to the local villagers, a huge contingent of Assam Police, along with personnel of the ITBP and the CRPF, “numbering around 200,” accompanied by senior officials of the Biswanath district administration and the forest department crossed the Rajghar Ali road to stop the work.
Even though the officials of Tarasso circle explained to their Assam counterparts that the area is under the government of Arunachal, the officials of Assam reportedly refused to budge.
“Only 10 IRBn jawans and some officials were present with the villagers. The Arunachal Pradesh Police and the local administration were outnumbered by the Assam side. They had the audacity to come 6 kms inside Arunachal territory and stop a very important road project. This is a slap on the face of the state government,” the villagers said.
“The people of both Assam and Arunachal living along the boundary regard Rajghar Ali road as the natural boundary between the two states. In this case, the Assam Police entered 6 kms inside Arunachal territory and stopped the PMGSY work. They have even seized the forkland which was engaged in the construction of the road. They have disrespected the mutual agreement that the two states share,” said a villager of Tarasso.
The locals have appealed to Chief Minister Pema Khandu and MoS (Independent) for Youth Affairs & Sports, Kiren Rijiju, to intervene and resolve the matter at the earliest.
Meanwhile, the deputy commissioner of Biswanath has issued an order, asking the DC and the SP of Papum Pare to attend a meeting at Biswanath Chariali on 11 December to resolve the issues arising out of this latest dispute.