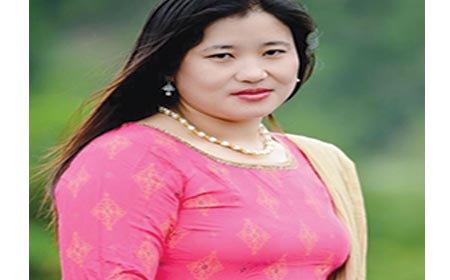 ITANAGAR, Dec 11: Mepung Phassang Cheda, wife of Arunachal Pradesh Publishers and Broadcasters Guild and the Editor of The Arunachal Pioneer, Chopa Cheda, breathed her last at a Chennai hospital on Wednesday, after a prolonged illness.
Mepung was 39, and is survived by two sons and four daughters.
Born to late Chakang Phassang, Mepung was loved and admired by all. The younger sister of state BJP vice-president Tame Phassang, she was also a former chairperson of the Gyadom Welfare Society (Women’s Wing).
Devastated by the sad demise, the media community under the aegis of the Arunachal Press Club (APC), the Arunachal Pradesh Union of Working Journalists (APUWJ) and the Arunachal Electronic and Digital Media Association (AEDMA) deeply mourned her demise and prayed for eternal peace of the departed soul.
“Words are not sufficient to console the bereaved family at this hour of pain; yet it is our modest prayer that the almighty gives enough strength and solace to the family to bear this irreparable loss,” a joint statement from the APC, the APUWJ and the AEDMA said.
A woman with a beautiful personality, integrity and action, Mepung lived a short but meaningful life. She will always be remembered, the statement added.
Legislative Assembly Speaker PD Sona also deeply mourned Mepung’s sudden and untimely demise.
The speaker prayed to the almighty for eternal peace of her departed soul, and for strength to the bereaved family in this hour of grief.
Sports Minister Mama Natung also shared his condolence with the press fraternity of the state at untimely demise of Mepung Phassang Cheda, wife of Arunachal Pradesh Editors and Publishers Guilds President Chopa Cheda. He prayed for eternal peace of Late Mepung.
The Arunachal Publishers & Broadcasters Guild (APBG) also mourned the demise of Mepung Phassang Cheda who passed away after valiant struggle.