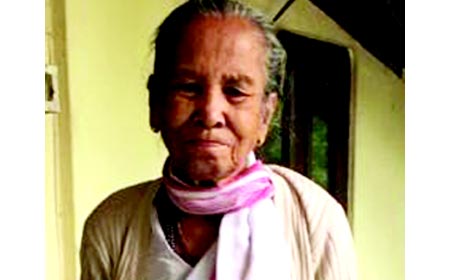 Staff Reporter
ITANAGAR, Dec 11: Minoti Riba, renowned cooperator and wife of former chief minister Tomo Riba, passed away on Wednesday morning at her E Sector residence in Naharlagun after a brief illness. She was 80, and is survived by six children.
She had earlier donated her body to medical science. Her body will be handed over to the Tomo Riba Institute of Health & Medical Sciences (TRIHMS) on Thursday morning.
Riba was the first in the state to start the cooperative movement. She had specialized in cooperation, starting with a course in methods and teaching of cooperative education, from the National Cooperative Union of India, New Delhi, in 1960. Later, she completed several training and courses in the cooperative sector.
She was the chairperson of the CCRD, Sammonoy Gut Cooperative Society Ltd (SGCSL), which continues to painstakingly document the cultures, arts and lives of the tribal people of the state. She was also instrumental in initiating the diploma in mass communication course in Rajiv Gandhi University.
In 2007, Riba had been conferred the Best Cooperator of Arunachal Pradesh Award, during the golden jubilee celebration of the cooperative movements in Arunachal.
Riba was also one of the first women’s rights activists in the state. Inspired by Begum Abida Ahmad, wife of the then president of India Fakruddin Ali Ahmed, Riba became instrumental in the creation of a women’s society for the uplift of women, and became the first secretary of the Mahila Imdad Committee. The symbol of this committee, the Mahila Imdad Hall, still stands in Barapani market of Naharlagun.
Minoti Riba was also an author who had started writing since her childhood for the All India Radio. She was the main architect in the opening of the branch of the Assam Sahitya Sabha (ASS) in Itanagar, and was an executive committee of the ASS. She was also the founder president of the Assam Arunachal Sammanoy Rakkhi Lekhika Samaroh Shakha Samity, Naharlagun.
A graduate from DR College Golaghat (Assam), Riba had retired as deputy registrar of the Cooperative Societies of the government of Arunachal. She had also served as and education officer in the erstwhile NEFA, and was a former member of the Consumer Dispute Reddressal Committee (CDRC) of the state government.

Chief Minister Pema Khandu joined the state in mourning the sad demise of Minoti Riba.
“With a heavy heart, I write to share the grief of losing one of the pioneers of women empowerment and a former member of the Consumer Dispute Reddressal Committee, Government of Arunachal Pradesh,” the CM said in his condolence message.
Describing Riba as a dedicated social worker, a caring mother, and a woman of substance who went on to become a member of organisations such as the ASS, the Lekhika Smaroh Samiti, the CDRC and the SGCSL, Khandu recalled that Riba was also awarded as the best cooperator of Arunachal during the golden jubilee celebration of the cooperative movements in the state.
“Late Minoti Riba will be forever remembered for her unprecedented role in the cooperative movement of Arunachal Pradesh since 1957. She was a first-generation officer who educated Arunachal about the cooperative movement. My respect for the great soul grew manifold when I came to know that she donated her body to the TRIHMS,” Khandu said.
“In this moment of grief, me, my family, colleagues in the government, and the people of Arunachal Pradesh extend our solidarity with you and share the pain inflicted by one of the greatest truths of life,” the chief minister said in his message to the bereaved family.
Governor BD Mishra said that in Riba’s sudden departure “the state has lost a pious lady, who till the last moment worked for the poor, needy and physically challenged people.”
Conveying heartfelt condolences to the bereaved family on behalf of the people of Arunachal and the Raj Bhavan family, the governor said his prayers and thoughts are with the family members in this sad hour.
Mishra joined all Arunachalees in praying to the almighty to give eternal peace to the departed soul, and strength to the bereaved family to bear the irreparable loss.
As a mark of respect to Riba, the governor, accompanied by Commissioner to Governor RP Singh, DGP RP Upadhyaya, and officials of the Raj Bhavan visited the bereaved family and laid wreaths on Riba’s mortal remains.
Legislative Assembly Speaker PD Sona also deeply mourned the demise of Minoti Riba.
In his condolence message, the speaker said, “Late Minoti was not only a social reformer, a writer and a cultural activist but also a kindhearted person who loved everyone.”
Sona, who met the bereaved family in Naharlagun, offered his heartfelt condolences and prayed for eternal peace of the departed soul.
The Arunachal Pradesh Literary Society (APLS) also deeply mourned the passing away of Minoti Riba.
An APLS team, led by its president YD Thongchi, visited her residence to pay their last respects.
Recalling Riba’s invaluable contributions to the growth of socio-cultural relations between Arunachal and Assam, Thongchi led the team in praying for eternal peace of the departed soul.
The APLS had recently felicitated Riba for her “outstanding and tireless contributions in the fields of art, culture, literature and social service over the last five decades and for being a bridge between Assam and Arunachal Pradesh.”
The Arunachal Pradesh Women’s Welfare Society (APWWS) also mourned Riba’s demise.
“She was an epitome of strength, courage and dignity who played various roles in a patriarchal society,” the APWWS said in a statement.
“She was a founder member of the Mahila Imdad Bhawan, which was established in 1976 with the sole objective of empowering the women of Arunachal Pradesh by imparting various training. She was vocal and always spoke her mind,” it said.
Sports Minister Mama Natung also condoled demise of Riba. In his condolence, Natung termed Riba as iconic lady who promoted the documentation of rich tradition and culture of Arunachal Pradesh.
Basar MLA Gokar Basar also expressed heartfelt condolence at demise of Minoti Riba. In his message he said , ” In this odd time of demise of my Ayo Minoti Bora Riba, I convey my deep condolences to the bereaved family, even as I mourn today but due to CAB strike in Assam, I could not reach Nagarlagun to pay tribute to great soul.”
The Arunachal Publishers & Broadcasters Guild (APBG) has also joined the state in mourning the sad demise of Minoti Riba.