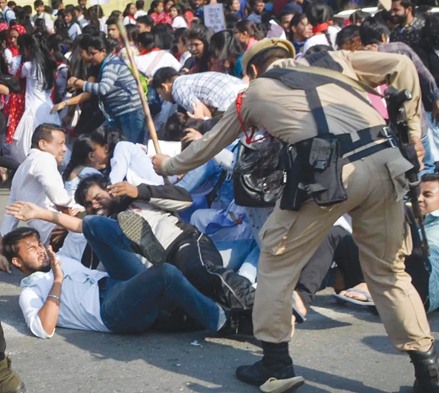 GUWAHATI/NEW DELHI, Dec 12: Two people were shot dead in police firing as Assam, the hotbed of the anti-CAB protests, plunged into chaos on Thursday with thousands of agitators descending on the streets, defying curfew, thumbing their nose at the Army contingents staging flag marches.
An official of the Gauhati Medical College & Hospital told PTI that one person was brought dead and another succumbed to injuries during treatment. However, protesters claimed that three people had died in police firing. Hospital sources said 11 people were brought there with gunshot injuries.
Incidents of police firing were reported from several places in Guwahati, including Hatigaon, Lachitnagar, Bashishta, Downtown, Ganeshguri and Lalungaon.
Several towns and cities were placed under indefinite curfew, including Guwahati, the epicentre of protests, besides Dibrugarh, Tezpur and Dhekiajuli. Night curfew was imposed in Jorhat, Golaghat, Tinsukia and Charaideo districts, officials said.
Two people were shot dead by security forces in Guwahati, which has turned into a garrison town with Army, paramilitary and state police personnel present in every nook and corner.
Police also opened fire at Madhavdham in Tezpur when a person allegedly belonging to a Hindu right organisation ploughed his vehicle through a group of protesters, injuring four people.
Protesters overpowered the man, set his vehicle ablaze, and assaulted him, prompting police firing, an official said.
RSS offices were vandalized in Amolapatty in Golaghat, besides places like Dibrugarh, Sadiya and Tezpur.
Residences of Handloom Minister Ranjit Dutta (in Behali), and BJP MLAs Padma Hazarika (in Sootea) and Binod Hazarika (in Chabua) were also attacked.
Prime Minister Narendra Modi appealed for calm and sought to assuage the concerns of the protesters, insisting that his government was committed to safeguard their rights.
In a series of tweets, in both Assamese and English, the prime minister said he personally and the central government were “totally committed to constitutionally safeguard the political, linguistic, cultural and land rights of the Assamese people as per the spirit of Clause 6.”
Clause 6 of the Assam Accord guarantees safeguarding local rights, language and culture.
Notwithstanding his words of comfort, internet services in 10 districts were suspended for another 48 hours, beginning 12 pm, to prevent “misuse” of social media to disturb peace and tranquillity, and to maintain law and order, officials said.
Internet services will remain suspended in Lakhimpur, Dhemaji, Tinsukia, Dibrugarh, Charaideo, Sivasagar, Jorhat, Golaghat, Kamrup (Metro) and Kamrup, according to Additional Chief Secretary (Home and Political Department).
Curfew in Shillong, mobile internet suspended Mobile internet and messaging services were also suspended in neighbouring Meghalaya for 48 hours since 5 pm on Thursday after incidents of vandalization of vehicles.
Areas under two police stations in state capital Shillong were placed under curfew.
Though no major incident of violence was reported from Tripura, state capital Agartala observed a shutdown, with educational institutes and offices closed.
The Railways has suspended all passenger train services in Tripura and Assam and short-terminated long distance trains to the region at Guwahati following protests in the two states over the passage of the CAB, a railway spokesperson told PTI in New Delhi on Thursday.
After a railway station in Dibrugarh’s Chabua, the hometown of the Assam chief minister, was set on fire late Wednesday night besides the Panitola railway station in Tinsukia, 12 companies of the Railway Protection Special Force have been dispatched to the region, RPF chief Arun Kumar told PTI in the national capital.
An unspecified number of flights to the Northeast, including Guwahati, were rescheduled or cancelled, an official of the Kolkata airport said.
As protests continued, the information & broadcasting ministry issued an advisory to private satellite TV channels to be cautious about airing content likely to incite violence, promote antinational attitudes and contain anything affecting the integrity of the nation. (PTI)

ITANAGAR, Dec 12: The Rajiv Gandhi University Students’ Union and the Students’ Union of NERIST are going to take out a ‘peaceful mass protest rally’ from the RGU campus to the Raj Bhavan here on Friday over the passing of the citizenship amendment bill (CAB) in Parliament.
The students of RGU had organised a protest on Wednesday night, after the passage of the contentious bill in the Rajya Sabha.
The students burned effigies of Prime Minister Narendra Modi, union Home Minister Amit Shah, MoS (Independent) for Sports & Youth Affairs Kiren Rijiju, MP Tapir Gao, Assam Chief Minister Sarbananda Sonowal, and senior Assam minister Himanta Biswa Sarma.
The students of NERIST also staged a protest over the passing of the CAB.