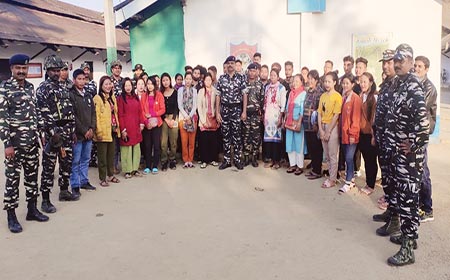 CHANGLANG, Dec 14: Scores of people from Tirap, Changlang and Namsai districts who were stuck in various parts of Assam’s Dibrugarh and Tinsukia districts were evacuated in the intervening night of 13 December.
As many as 104 people, including students, patients, traders and government employees of Changlang (93), Namsai (6) and Tirap (5) had been stranded in Borboruah, Dibrugarh, Tinsukia and Digboi areas because of the massive anti-Citizenship Act protests in Assam.
The evacuation drive was carried out by the Changlang district administration and the APP in coordination with the Assam Police, the Indian Army and paramilitary forces in Dibrugarh and Tinsukia districts, under the supervision of Changlang DC RK Sharma and SP Mihin Gambo.
Earlier in the day, a couple hailing from Kharsang was evacuated along with
their newborn baby from a private hospital in Assam’s Margherita. They had been stranded there for four days.
The DC expressed gratitude to the 171 CRPF for escorting all the stranded people from Borboruah to the Arunachal Bhavan in Dibrugarh and providing them food at the CRPF camp at the request of the Changlang SP.
Sharma also thanked the people of Borboruah, who provided the stranded students with food and shelter. He commended Dixon Kimsing, a stranded student who constantly kept coordinating with other stranded students in Dibrugarh and Borboruah.
The DC also commended the evacuation team led by Inspector CA Namchoom and Changlang PS OC A Mehta for successfully carrying out the evacuation after more than 20 hours of strenuous efforts.