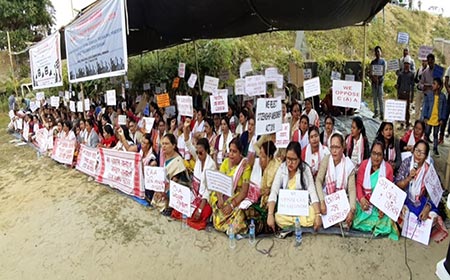 ITANAGAR, Dec 22: The Assamese people living in the capital complex on Sunday staged a peaceful sit-in protest against the recently amended citizenship law at the IG Park tennis court here.
The protesters vented their anger and frustration at the Centre over the law, saying it would adversely impact the people of Assam and all other Northeast states.
“The amended Citizenship Act is a threat to our identity, language and livelihood, and will dilute our culture,” the protesters said, and vowed not to give up their protest unless the act is repealed. They said Assam is already overburdened with illegal immigrants from Bangladesh and now it cannot accommodate any more of them.
The protest was also joined by representatives from the North East Students’ Organization (NESO), the All Arunachal Pradesh Students’ Union, and various NGOs and associations of the state, who expressed their solidarity with Assam.
NESO coordinator Pritam Waii Sonam said “the grounds of protests against the act in mainland India and the Northeast are vastly different.”
“The protests in the mainland are largely on the issue of exclusion of Muslim immigrants, while in the Northeast the protest is against illegal immigrants, no matter which religion they belong to,” he said.
Sonam said the Citizenship (Amendment) Act (CAA) nullified the Assam Accord, which had been signed after a six-year-long agitation, from 1979 to 1985, that left 855 dead and thousands injured.
As per Clause 5 of the accord, foreigners who came to Assam on or after 25 March, 1971, shall continue to be detected, deleted and expelled in accordance with the law.
The CAA sets 31 December, 2014, as the cut-off date for recognizing illegal immigrants as eligible refugees who may acquire Indian citizenship, which the protestors say is a violation of the Assam Accord.
Sonam said that though the people of the region are geographically and politically divided, “they are emotionally and physically united.”
He said protests are being staged not only in India but also across the world, wherever there are people from the region. He also said that no NE state, including the ILP regime states, will be safe, if Assam, the gateway to the Northeast, is not safe.
Urging the Centre to respect the sentiment of the people of the Northeast and repeal the act, the NESO leader vowed to continue the movement if the CAA is not scrapped.
Sonam also informed that the NESO has filed a PIL in the Supreme Court, and that the hearing is on 22 January.