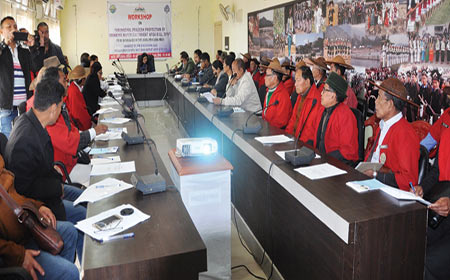 AALO, Dec 23: “Sources of water are diminishing day by day, and the time has come for us to rejuvenate the existing sources to cater to the growing water needs of the ever-expanding population,” West Siang DC Swetika Sachan said.
Addressing a ‘sensitization and consultation workshop’ on the Arunachal Pradesh Protection of Drinking Water Catchment Area Bill, 2019, here in West Siang district on Monday, the DC said the government is keen on protecting the catchment areas of all sources of water through legislation.
“People should not worry that all lands near water sources will be notified and kept under the government,” the DC said, and asked all the head gaon burahs of the district to “draw public opinion on the draft bill by 26 December.”
She asked the HGBs of the district, who were apprehensive of losing their jungle lands through such legislation, to conduct awareness workshops in their respective jurisdictions and submit a report by 26 December.
PHE EE Kirba Sora explained the draft bill, and said that “diminishing sources of water everywhere is a cause of concern for every consumer, and the government is mooting a legislation to protect all catchment areas.”
PHE AEs Bomi Nyorak and Geli Noshi made PowerPoint presentations on the draft bill.
Among others, former minister Doi Ado, former ZPM Tumpe Ete, public leaders, and representatives of the ATPDBS, Galo Ane, and the APWWS attended the workshop. (DIPRO)