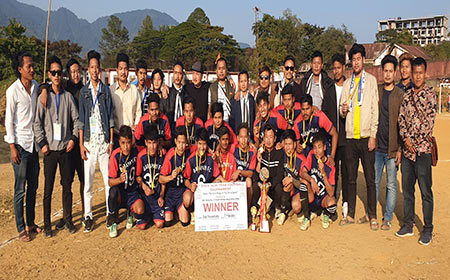 ITANAGAR, Dec 27: Bara-pani lifted the ‘New Year football trophy’, defeating Ward No 12 2-1 in the final played at the GHSS playground ground here on Friday.
Tagru Tallar, who scored both the goals for the winning team in the final, was adjudged the best player of the tournament.
Sangha Siku netted the consolation goal for Ward No 12.
The award for the best goalkeeper went to Ansari Bhai, while Surey Pordung became the highest scorer.
Government Higher Secondary Football Club was adjudged the ‘disciplined team’.
Thirteen teams from the capital complex participated in the tournament, which was organized by the IMC Ward No 12 Youth Welfare Association.
‘Say no to drugs and yes to sports’ was the theme of the tournament.