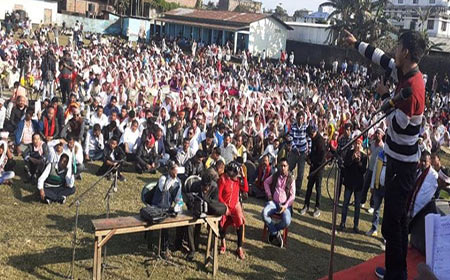 Correspondent
DHEMAJI, Dec 27: People from different walks of life staged a demonstration in Assam’s Dhemaji district on Friday as protests against the Citizenship (Amendment) Act (CAA), 2019, continued in Assam.
The Dhemaji unit of the All Assam Students’ Union, the Asom Jatiyatabadi Yuba Chatra Parishad, the All Tai Ahom Students’ Union, and the Krishak Mukti Sangram Samiti on Friday conducted a ‘Janatar garjan (citizens’ roar)’ at the Silapathar Hindi School.
Popular Assamese singer Bipin Chaudang called upon the citizens to continue their strike until the law is scrapped.
Similar programmes were earlier conducted at Bordoloni Charali, Moromi Tinali, Misamari and Joirampur. A mobile team is also planning to reach out to the rest of the district this week.
The organisations on Thursday launched a ‘mobile awareness camp’ to sensitize the rural people to the impact of the CAA.