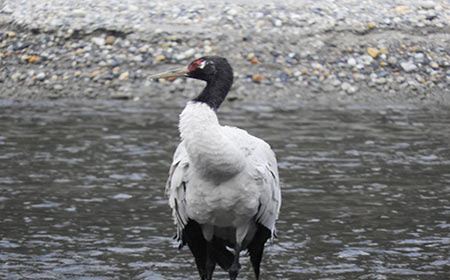 A black-necked crane at Nyamjang Chu, near Zemithang, in Tawang district, on 26 December. The crane arrived in Zemithang on 25 December. As of now, it is the only one spotted this season. The crane was spotted at the proposed barrage site of the NHPC’s 780 mw Nyamjang Chhu project. A short 3-km stretch along the Nyamjang Chhu river, between Brokenthang and Zemithang, is one of the only two regular, long-term wintering sites of the bird in India.
(Pic: Degin Dorjee)