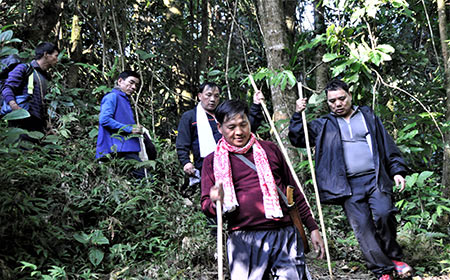 PAYUM, Dec 29: Health Minister Alo Libang, along with Rumgong MLA Talem Taboh, Mariyang-Geku MLA Kanggong Taku, and others recently went on a trek, themed ‘Luyor padyatra’, to villages in two districts.
The four-day trek, which started from Molo village on 22 December and culminated at Miging village in Upper Siang district on the 25th, was aimed at obtaining firsthand knowledge of the problems faced by the people of the unconnected villages, and reestablishing the age-old porter track across Luyor mountain, which connects Payum circle with Miging circle.
At Payum village, former ZPM from the village, Tamang Tachung, who has had to migrate to Kaying, owing to lack of basic amenities like road, electricity and telecommunication in the village, narrated the ordeals faced by the villagers. He informed that the village, which once comprised around 50 houses, was gutted in a devastating fire accident in 2018.
“Since then, the people started to migrate to places like Kaying, as rebuilding work is even more difficult, owing to lack of road connectivity. Now the village has hardly 25 houses, and that, too, with all aged people,” Tachung said.
Libang in his address empathized with the villagers, and expressed confidence in “the capability of the new MLA of the area, Talem Taboh, to work for the road connectivity of the area.”
“Being one of the ministers in the Pema Khandu government, it’s my sole responsibility to see that there is equal development in all the areas of the state,” Libang said.
He gave assurance that he would provide all assistance to the people of the un-reached areas.
Established in 1963, Payum is one of the oldest circles of the state, but it is still bereft of any visible development due to lack of road connectivity in the area.
The padyatra team reached Gasheng village on 23 December. There, HGB Tanye Gaduk lamented the lack of road communication to the remote circle.
“Due to lack of road, more than 200 households from Gasheng village have migrated to other places like Tuting, Yingkiong, Kaying, Aalo and Itanagar,” said Ambong Pabin, a resident of the village. “If the trend continues, one day the village may become a thing of the past.”
Another resident, Takot Pangu, apprised the team of the issue of the Dihang-Dibang biosphere reserve, which he said “is restricting the traditional rights of the local people.”
He said the biosphere reserve “is being implemented clandestinely, without taking the consent of the local people.”
Libang on his part said he would “extend every possible support to local MLA Talem Taboh at the government level, so that the people of the area can see the light of development someday.”
Taboh himself assured the villagers that he would make “sincere effort to bring road communication to the area,” adding that “the people’s mandate is the mandate for the development of the area.”
The team reached Miging village on 25 December. On the way, the minister and the others planted saplings at James Point to commemorate the ‘Luyor padyatra’. James Point demarcates the boundary between Siang and Upper Siang districts.
During the meeting at the village, Libang assured the residents that he would take up at the appropriate level the matter of the Bille-Miging road, being constructed by the BRO. The work on the road has been on hold for some time.
Taboh in his address assured the people of the two circles that “the connection between the two circles will be reestablished soon, when the road is completed.” He also promised to take up the issue of the road with the appropriate authority.